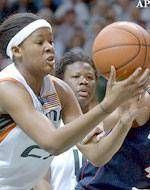 UConn (25-0, 12-0 Big East) used a 30-4 run that extended into the secondhalf to erase an early eight-point deficit. The deficit matched the largest theHuskies have faced at any point during the winning streak.

Only Tennessee earlier this season managed to put Connecticut in aneight-point hole during the winning streak. UConn trailed that game 54-46 inthe second half before winning 63-62 in overtime Jan. 4.

Taurasi, who leads the Huskies in scoring, had eight consecutive points and14 overall during the run, in which UConn was 12-of-17 from the field.

Taurasi finished 5-of-9 from the floor and 9-of-10 from the free throw linein leading the Huskies to their 31st straight win against Big East opponentsand 45th straight during Big East regular-season and tournament games.

UConn holds the women’s record for consecutive wins and is 24 victories shyof tying the men’s record of 88 set by UCLA from 1971-74. UConn has not lostsince a 90-75 loss to eventual champion Notre Dame in the 2001 Final Four.

The Hurricanes used an aggressive man-to-man defense to force 13 UConnturnovers and keep the game close early.

Miami led the Huskies 25-18 with 7:04 left in the first half. James, theleading freshman scorer among all Division I women, scored 14 points in thefirst half.

But UConn quickly countered with the big run to take control of the game.Miami shot just 1-of-14 from the field and committed eight turnovers during the11-minute stretch.