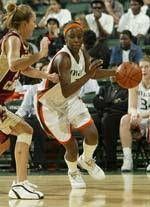 CORAL GABLES, Fla.-The Miami women’s basketball team fell to Syracuse 62-59 for the first time at home since the 1988-89 season Saturday night in the Convocation Center.

The Hurricanes fall to 12-5 overall and 4-2 in the BIG EAST, while the Orangewomen improve to 7-11 overall and 2-5 in conference.

The Orangewomen went on an 11-2 to open the game and continued to dominate leading by as many as 17 points in the first half.

The Miami offense struggled in the first 20 minutes shooting a dismal 28% (7-25) from the field.

Syracuse outrebounded Miami 35-11 in the first half taking a 34-21 lead into the lockerroom at half time.

Newcomer Tatjana Marincic (Mississauga, Ontario) came off the bench to knock down the game tying (38-38) three-pointer with just under 14 minutes in the game.

Broussard scored a jumper at 10:47 to put the Hurricanes up by one-point (42-41) taking the lead for the first time in the game.

Over the next five minutes Miami forced seven Syracuse turnovers and held a nine-point (57-48) advantage with just under five minutes to play.

The Orangewomen answered back and outscored Miami 14-2 down the stretch to regain the lead and drop the Hurricanes to 0-2 at home in BIG EAST play.

Julie McBride scored nine of her game-high 22 points over the last four minutes of the game.

The Hurricanes are back in action Tuesday at 7 p.m. hosting Virginia Tech.