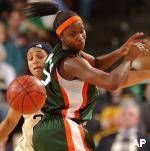 CORAL GABLES, Fla.-Freshman Tamara James (Dania, Fla.) earns BIG EAST Rookie of the Week for the fifth time this season after leading the Miami women’s basketball team to a 2-0 week.

The freshman recorded her fifth double-double of the season with 30 points and 10 rebounds in an 85-68 victory at Syracuse.

James then scored 27 points, including three 3-pointers, and added six rebounds in an 80-70 win at No. 16 Notre Dame.

She ranks sixth in the nation averaging 24.8 points per game.

Rebecca Lobo of Connecticut leads the BIG EAST winning the award seven times during the 1991-92 season.