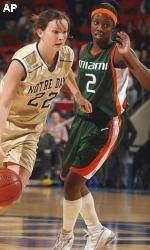 The Irish, who lost 71-54 to Purdue a week ago, dropped two straight homegames for the first time since the start of the 1994-95 season. That was alsothe last time the Irish lost two home games in a season.

The score was tied at 44 at halftime, but Meaghan Saake hit a 3-pointer tostart the second half, and the Hurricanes never trailed again. The Irish weredown just 57-56 after Jacqueline Batteast scored on a layup with 8:43 left, butNotre Dame didn’t score another basket from the floor until Alicia Ratay hit a3-pointer with 39 seconds left to cut the lead to 75-66.

Melissa Knight started the decisive 15-5 run by the Hurricanes by hitting a3-pointer. James hit a pair of 3-pointers as Miami continued to pull away.

Shaquana Wilkins added 10 points for Miami, and Yalonda McCormick had nineassists, seven in the first 13 minutes. She also had four of Miami’s 14 steals.

Teresa Borton led the Irish with 13 points, and Batteast had 12 points and11 rebounds. Le’Tania Severe scored 12 points, but she also turned the ballover 11 times.

The Hurricanes’ winning streak is their longest since they had a 10-game runduring the 1992-93 season.