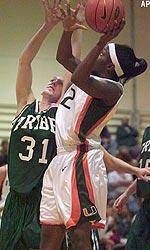 SYRACUSE, NY-The Miami women’s basketball team extends its winning streak to seven in a row with an 85-68 victory over Syracuse Wednesday night at Manley Field House.

The Orangewomen fall to 5-8 overall and 0-2 in conference.

Freshman Tamara James (Dania, Fla.) led all scorer’s with 30 points, six points shy of her career-high of 36. James recorded her fifth double-double of the season with 30 points 10 rebounds. She has led the Hurricanes in scoring in 12-of-13 games this season.

Miami improves to 14-5 in the all-time series with Syracuse.

The Orangewomen led for the first few minutes of the game until the Hurricanes took a 13-12 lead on a lay-up by James with 13:56 remaining in the first half. Miami controlled the tempo of the game from that point on.

UM owned a 41-29 lead at halftime and continued to build on the lead in the second half.

Syracuse cut Miami’s lead to eight points with 9:14 left in the game on a made three-pointer from Julie McBride. This was the closest the Orangewomen would come as Miami went on an 8-0 to re-gain the double-digit lead.

The Hurricanes scored 43 points off of Syracuse’s 30 turnovers. UM stole the ball 21 times.

April Jean led the Orangewomen with 23 points and 15 rebounds.