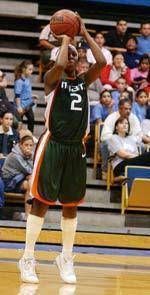 WASHINGTON, D.C. – Despite five Mary Lisicky (Whitehall, Pa./Whitehall)threes in the second half and Rebekkah Brunson’s (Oxon Hill, Md./OxonHill) seventh double-double of the season, the Hoyas fell to theUniversity of Miami 60-57 on Saturday afternoon at McDonough Gymnasium.

Georgetown opened the game shooting just 25% from the field versus 46%for Miami. Despite the discrepancy the Hoyas held the Hurricanes tojust 31 points in the first half, a solid defensive effort given Miami’s82.9 points per game average.

Trailing by six at the break, Georgetown rallied to improve its secondhalf shooting to 48% from the field. Lisicky paced the Hoyas with 15second half points, all off of three point field goals. Her sixththree-ball put Georgetown ahead for the first time in the second half,up 55-54 with just over a minute and a half remaining. The teams tradedturnovers before Miami tied the game on a free throw and then TamaraJames connected on a game breaking three pointer of her own to send theHoyas to defeat for only the second time this season.

Lisicky led the Hoyas with 20 points. Brunson followed up adouble-double performance on Thursday with 17 points against theHurricanes, leading all rebounders with 14.

The loss drops Georgetown to 8-2 and 0-1 in BIG EAST play. The Hoyascontinue the BIG EAST schedule when they host the Providence Friars onWednesday, January 8th at 7 p.m.