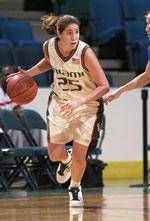 CORAL GABLES, Fla.-Meghan Saake (Wellington, Fla.) was named Most Valuable Player of the Gatorade Holiday Classic for the second year in a row after leading the University of Miami women’s basketball to a 97-66 victory over Maryland to claim the championship title Sunday night at Knight Sports Complex.

Miami (8-3) remains a perfect 7-0 at home this season, winning the tournament for the third year in a row.

Maryland falls to 6-5 on the season. William & Mary (4-5) claimed the consolation title after defeating Cleveland State (1-8) 78-71 in the first game of the afternoon.

Junior Shaquana Wilkins (Plymouth, Fla.) averaged a double-double in the tournament with 13.5 points and 12.5 rebounds per game.

The Hurricanes opened the game on a 9-0 run Melissa Knight (Philadelphia, Pa.) hit a three-pointer with 16:30 remaining in the half to give UM the double-digit lead.

Miami maintained the double-digit lead in the first half leading 50-34 at halftime.

The Terps cut Miami’s lead to eight points with nine minutes remaining in the game, that was the closest they would come as Knight hit a jumper on the next possession giving UM the double-digit lead 68-58.

Knight’s jumper sparked an 11-0 run by the Hurricanes to seal the win.

Knight scored a career-high 23 points on 10-of-12 shooting from the field and three-of-four from beyond the arc.

The Hurricanes are back in action Saturday as they open BIG EAST play on the road facing Georgetown.