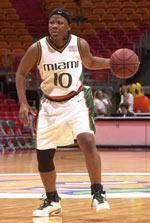 Miami outscored EMU 57-33 in the second half, shooting 61% from the field.

UM win’s its third game in a row improving its overall record to 6-3. The Eagles fall to 2-7 on the season.

Tamara James (Dania, Fla.) led all scorers with 24 points and eight rebounds. Yalonda McCormick (Miami, Fla.) recorded her first double-double of the season with 12 points and a career-high 10 assists.

Chanivia Broussard (Miami, Fla.) came off the bench to score 18 points in 21 minutes of action.

The Eagles opened the game on an 8-0 run and led the entire first-half, taking a nine-point lead into the lockeroom at halftime.

The Hurricanes opened the second-half on a 21-2 run to take the lead. Miami led by as many as 21 points winning by a margin of 19 points for the fifth time this season.

Miami is back in action hosting the Gatorade Holiday Classic Dec. 28-29.