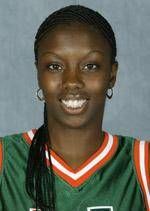 The Hurricanes drop their first contest of the season falling to 3-1 overall, while the Phoenix improve to 4-1 on the season.

Freshman Tamara James (Dania, Fla.) led all scorers with 22 points and nine rebounds on the afternoon.

The first10 minutes of the game the lead changed six times with three ties, with 9:03 remaining in the first half Miami went on a 6-0 run to take the 17-14 lead.

Miami continued to control the offense gaining a seven-point lead with four minutes before the half. UWGB fought back and ended the first half with three three-pointers in the last three minutes to tie the game 30-30 at halftime.

The Phoenix started the second half the same way they ended the first half, storming out on a 8-0 run sparked by back-to-back three-pointers.

Miami cut the lead to four with 17 minutes remaining in the game but that was the closest the Hurricanes would come as the Phoenix connected on 10 three-pointers in the second half alone. The Hurricanes shot 51.7% from the field, while the Phoenix shot 48.3%. Miami turned the ball over 24 times, compared to 15 turnovers for UWGB.

UWGB shot 50% from the three-point line, connecting on 16 three-pointers.

Meghan Saake (Wellington, Fla.) also scored in double digits adding 13 points and four rebounds. The Hurricanes are back in action Tuesday night travelling to face Florida in Gainesville at 7:30 p.m.