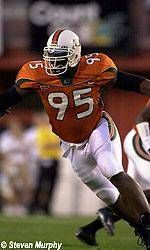 McDougle A Finalist For Hendricks Award

MIAMI, FL – The Miami Touchdown Club is proud to announce the finalists for the inaugural Ted Hendricks Defensive End of the Year Award?. The Hendricks Award will be presented at the conclusion of the football season to the best collegiate defensive end in the country. A prominent committee of 45 coaches, national media, and sports information directors has selected four finalists.

On-field performance, leadership abilities, and contributions to school and community are some of the criteria considered for the award. Candidates may be from any classification (freshman through senior), as well as from any recognized four-year NCAA accredited school (Division I through Division III). The candidate’s primary position must be defensive end. Defensive ends that shift along the line are eligible.

The 2002 Hendricks Award Finalists are (in alphabetical order):

Michael Haynes, Penn State University, 6’3″, 270 lbs., Senior; – 10 games, 68 tackles, 46 solos; 19 tackles for loss of 122 yards, 12.5 sacks for 109 yards; 4 passes broken up; 1 fumble recovery for 12 yards; 6 forced fumbles. Named CNNSI Mid-Season First Team All-American and Big Ten Defensive Player of the Week on Sept. 23rd. Haynes is an animal sciences major, who is considering a career as a veterinarian. He has done an internship at Reptiland in Allenwood, Penn., and regularly visits local elementary school and speaks with and reads to children.

Jerome McDougle, University of Miami (FL), 6’4″, 271 lbs., Senior; – 8 Games played, 35 tackles, 20 solos; 5.5 tackles for losses of 32 yards, 4 sacks for 31 yards; 3 passes broken up, 17 QB hurries. McDougle is a criminology major who is on track to earn his bachelor’s degree in May, 2003. McDougle serves as a mentor for young football players for the annual Duane Starks Foundation Football Clinic and was a motivational speaker for the 2001 South Florida High School All-Star Game. He has also volunteered with UM’s Canes On Patrol program, a partnership with the Broward County Sherriffs Department.

Cory Redding, University of Texas 6’5″, 270 lbs., Senior; – 54 tackles, 38 solos; 16 tackles for losses of 61 yards, 15.5 sacks for 42 yards, 30 QB hurries, 2 forced fumbles, 1 fumble recovery, 1 pass broken up. Redding is a youth and community studies major. Redding serves as a mentor and regularly speaks at local elementary and middle schools throughout the year. He has also volunteered at the Children’s Miracle Network Telethon.

“The Hendricks Award selection committee has selected four exceptionally talented, sportsmanship-oriented, and community-involved finalists for our inaugural award,” said Ted Hendricks. “Their abilities on the field and spirit of good citizenship have made them stand out in competition. I congratulate all of our defensive end finalists and wish them a successful conclusion to their collegiate season.”

“The Hendricks Award has already had an incredible inaugural year and we could not have had a better finalist ballot than with these special student-athletes” said Adam R. Lubkin, Chairman of the Ted Hendricks Defensive End of The Year Award. “All of these men embody what Ted Hendricks and the award is about, honoring the best collegiate defensive end both on and off the field. We are definitely on track to become one of the preeminent post-season awards in college football.”

The award’s namesake, Ted Hendricks, was the only three time All-American for the University of Miami Hurricanes, earning the honor from 1966-68. His 6’7″ frame and his rangy arms resulted in his University of Miami teammates bestowing the nickname of “The Mad Stork.” The Baltimore Colts selected Hendricks in the second round of the 1969 draft. Hendricks won four Super Bowl championships with the Colts and Raiders. Hendricks is remembered for being a ferocious, strong, determined, and devastating tackler. Hendricks played in 215 consecutive games until his retirement in 1983 and is enshrined as a member of the NFL Hall of Fame and the College Football Hall of Fame.