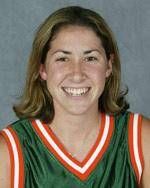 Saake (Wellington, Fla.) also grabbed five rebounds, dished out four assists and was 11-of-17 from the field.

Two other players scored in double figures for the Hurricanes, Shaquana Wilkins (Plymouth, Fla.) with 15 and newcomer Tamara James (Dania, Fla.) with 14 points.

Wilkins recorded a double-double as she grabbed a game-high 14 rebounds.

Tracy Reid a member of the Phoenix Mercury led the Champions with 26 points and 13 rebounds.

The Hurricanes now look toward their next exhibition game, Nov. 19 versus the Premier Players at 7 p.m. at the Knight Sports Complex.