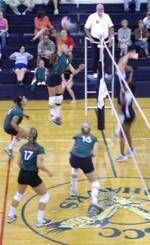 The undefeated University of Miami volleyball team (11-0) executed a solid effort in a three-game victory over Florida Atlantic University (5-10) Friday night at the Knight Sports Complex.

The victory over the Owls marked the national leading 22nd straight victory for the Hurricanes dating back to last season.

Against Florida teams this season, Miami is 3-0 and 10-4 since the program’s restoration in 2001. Along with FAU, UM has also registered victories over Florida State and Florida International.

In the victory over FAU, the Hurricanes scored by committee, but senior outside hitter Marcela Gamarra (Medellin, Colombia/Miami-Dade CC) led the effort with 12 kills and a match high 13 digs. Sophomore outside hitter Elizabeth Tyson (Jacksonville, Fla./Bishop Kenny HS) boasted the highest attack percentage with a match high .562. She chipped in with 11 kills.

The Hurricanes return to action on Wednesday, September 25 as they host the Stetson Hatters at the Knight Sports Complex at 7 p.m.