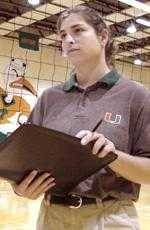 Nicole Lantagne Welch is coming off of her second season as the head coach for the University of Miami volleyball program. In two years as a head coach, Lantagne Welch has accumulated a record of 44-12.In 2002, Lantagne Welch led the Hurricanes to the program’s first-ever NCAA Tournament berth and on to the Sweet 16 following a win over perennial power Wisconsin. UM finished the season ranked # 23 in the nation.

Lantagne Welch was selected as the American Volleyball Coaches Association’s Regional Coach of the Year for the Northeast.

Lantagne Welch, an Encinitas, Calif. native, played collegiately for the University of Maryland, where she was a four year starter as a setter. Lantagne finished her outstanding collegiate career as Maryland’s all-time assists, digs, and matches played leader. She graduated with a degree in Business, Marketing.

Lantagne Welch came directly to Miami from Texas A&M where she was an assistant coach from 1997-2001. The Aggies finished in the top 20 in each of her three seasons with them including a final ranking of #9 in 1999.

The use of the libero player with 12 substitutions. The libero is adesignated back-row player who cannot serve, attack or set inside theattack line. The libero (pronounced LEE-bah-ro) rule, which is currently usedin international competition, allows coaches to better utilize a defensivespecialist. For example, when the libero leaves the match, she only hasto sit out for one rally before re-entering. She can replace any player inthe back row, allowing her to play nearly the entire match. When the liberoenters or leaves the match, it is not counted against a team’s 12substitutions. The use of the pursuit rule allowing players to retrieve a ball thathascrossed the centerline outside the court under certain circumstances. It is not a fault to completely cross the center line under the netwithone foot or one hand if the encroachment does not present a safetyhazard toopponents and there is no interference with opponents. In a deciding game, teams must switch sides at eight points. Expulsion or disqualification of a player results in a loss of rally(point for the opposing team).