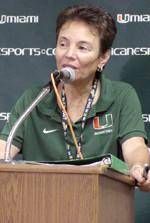 CORAL GABLES, Fla.– Head women’s basketball coach Ferne Labati announces the signing of 5-9 guard Katie Hayek (Lancaster, Pa.) to a national letter of intent to attend the University of Miami in the fall.

“We are very excited with our newest addition to the Hurricane family,” said Labati. “Katie is a versatile player with a great work ethic and an excellent three-point shot.”

She is a four-year letterwinner and the second highest scorer in LCHS history with 1,510 points in her career.

The captain of her team she earned all-star honors from the Intelligencer Journal, Harrisburg Patriot News and the New Era. She was also named to the Associated Press Pennsylvania All-State second team.