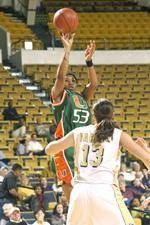 Atlanta, Ga. (www.hurricanesports.com) – – Chanivia Broussard scored a game-high 20 points and Meghan Saake added 16 to lead Miami to a 73-64 victory over Georgia Tech in the first round of the Women’s National Invitation Tournament at Alexander Memorial Coliseum at McDonald’s Center.

Miami (19-11) advances to a second round matchup against Houston Saturday at 7 p.m. in Houston, Texas. Tech finishes its season with a record of 15-14.

Tech shot 54.9 percent for the game, including 69 percent in the first half to take a 45-36 lead at the intermission, but the Yellow Jackets committed 27 turnovers, leading to 23 Miami points.

“I’m very disappointed in the loss because we really weren’t ready to have the season be over,” said Tech head coach Agnus Berenato. “I think that the big difference in the game was guard play and our lack of a point guard. Not having a veteran point guard was something that Miami really exploited in the second half. We faked it in the first half, but Meghan Saake is the defensive player of the year in the Big East and you can see why. We got the ball inside in the first half when they were in a zone, but they pressured the point in the second half with Saake.”

Trailing by nine, the Hurricanes opened the second half with a 15-2 run, aided by nine Tech turnovers. Miami took the lead for good on a steal and layup by Saake that put Hurricanes ahead 48-47.

“This was a great step for our program, winning an NIT game on the road against a very tough ACC opponent in Georgia Tech,” said Miami head coach Ferne Labati.

Tech pulled within three points at 67-64 with a minute to play, but the Hurricanes hit six free throws down the stretch to seal the win.