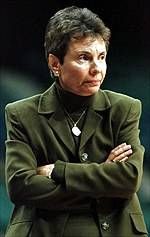 Women's Basketball Participates In The WNIT

CORAL GABALES, Fla.-The University of Miami women’s basketball team was selected to participate in the Women’s National Invitational Tournament, playing Georgia Tech in the first round on Wednesday March 13 at 7 p.m. in Atlanta, Ga.

The Hurricanes will make their ninth post-season appearance and their third in the WNIT.

“I am thrilled to be playing in the post-season,” said head coach Ferne Labati. “This is what our program has strived for all season long.”

Miami ended the season in 5th place in the BIG EAST with an overall record of 18-11 and 10-6 in the conference.

Georgia Tech wrapped up the season with a 15-13 overall record and a 7-9 mark in the ACC.

The Hurricanes are 2-0 all-time versus the Yellow Jackets, including a 78-63 win in the last meeting during the 1991-92 season.

The winner of the game between the Hurricanes and Yellow Jackets will face the winner of the match-up between Rice and Houston at a site, date and time yet to be determined.

Tickets for the opening round game of the WNIT will cost $3 for students and children and $5 for adults and can be obtained by calling the Georgia Tech ticket office at (888) TECH-TIX.