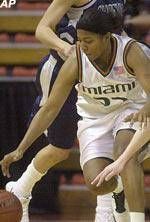 Miami was down 31-30 at halftime, but came out strong the second half, outscoring the Hoyas 39-21.

“Villanova is going to be a tough game for us. They’re a great team and deserve a lot more credit than people give them. It’s going to be a good game tomorrow.”

Villanova beat Miami, 80-52, in the only meeting between the two teams in the regular season.

The all-time series is tied at nine-all.

The game will be broadcast live on WVUM-90.5 FM or via the internet at hurricanesports.com/wvum.org.