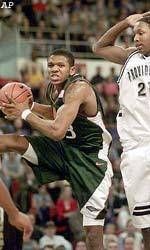 In the final home game of his career, Linehan had all four of his steals inthe first half. He finished with 10 points on 2-of-8 shooting.

Miami extended a 45-27 halftime to 23 points early in the second half.Providence staged a mild rally to pull within 10 points with three minutesleft, but got no closer.

Linehan’s record-breaking steal came with 1:37 to play in the first halfwhen he intercepted an out-of-bounds save by Rice.

Rice had 10 rebounds as Miami finished with a 28-24 advantage on the boards.