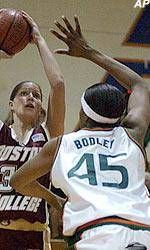 James, who scored only five points, made two free throws with 4.9 secondsleft after Jacobs made one of two foul shots to bring the Eagles within 58-57.

Kathryn Fowler had 11 points and nine rebounds for Miami (17-10, 10-6 BigEast) Meghan Saake added 10 points and five steals, giving her a school-record110 for the season.

The win was Miami’s third over a ranked opponent this season.

Then there were five ties and eight more lead changes.