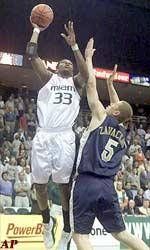 ON THE RED STORM:
The Red Storm enter the Miami game with a record of 16-7, 6-5 in the BIG EAST East Division, following an 85-83 overtime win over Connecticut at Madison Square Garden on Saturday. The Red Storm, which has won three straight, has been led in scoring by junior guard Marcus Hatten who is averaging 19.6 points per game. The JC transfer also leads the team in assists (4.7 apg) and steals (3.3 spg). The only other Red Storm player averaging in double-figures is senior forward Anthony Glover at 10.7 points per contest. Glover currently leads the team in rebounding (6.7 rpg). Either Hatten or Glover have led the team in scoring in 21 of 23 games this season. St. John’s has struggled on the road this season registering a 3-5 record.

THE SERIES:
Miami and St. John’s meet for the 25th time with the Red Storm leading the all-time series 14-10. St. John’s has won four straight against the Hurricanes including a 71-60 victory earlier this season at Alumni Hall. The Miami-St. John’s series has been closely contested with 14 of the last 16 games being decided by five points or less, or in overtime.

Marcus Hatten recorded 25 points, nine rebounds, six assists and three steals to lead St. John’s to a 71-60 win over the University of Miami at Alumni Hall.

Miami, which led 39-38 at the half, shot just 10 percent from the field in the second half, going 3-for-30. The Hurricanes made just one of their last 22 shots from the field.

Freshman Tristan Smith, St. John’s reserve point guard, hit just his second 3-pointer of the season to give the Red Storm the lead for good at 49-46 with 12:23 to play. That was the fifth lead change of the second half.

Anthony Glover added 11 points for St. John’s, while King had 10 points and seven rebounds. Marcus Barnes led Miami with 16 points, all in the first half, while Darius Rice had 13 on 3-for-15 shooting.

A WIN AGAINST ST. JOHN’S WOULD:

TV/RADIO COVERAGE:
The St. John’s game is being produced by ESPN Regional Television and will be broadcast on tape delay basis in Miami on Fox Sports Net Florida. John Sanders will handle the play-by-play duties with Bob Wenzel adding analysis.

UP NEXT:
Following the St. John’s game the Hurricanes hit the road to face Rutgers at noon on Sunday, February 17.

ON THE COACHES:
University of Miami head coach Perry Clark is in his second season with the Hurricanes and 13th season overall as a collegiate head coach. Clark is 36-17 (.679) at Miami, including an 20-4 start this season, while his career record in 13 seasons stands at 221-162 (.577). Last season Clark led the Hurricanes to a berth in the National Invitation Tournament marking the eighth time in 12 seasons he has guided his team to post season play.

BALANCED ATTACK:
The University of Miami is arguably one of the most balanced team in the nation offensively. All five UM starters are averaging in double-figures in scoring. Darius Rice leads UM in scoring at 14.5 points per game followed by John Salmons (14.0 ppg), James Jones (13.1 ppg), Marcus Barnes (11.5 ppg) and Elton Tyler (10.8 ppg). Miami joins Arizona as the only teams ranked among the AP or ESPN/USA Today polls that have five players averaging in double-figures.

All five starters have led the team in scoring at least once this season. Rice and Salmons have each led the team seven times, Jones six times, Tyler twice and Barnes once.

COMEBACK KIDS:
In Miami’s 102-96 overtime win against Providence on January 19, the Hurricanes came back from a 13-point second half deficit tying the UM record for the largest second-half comeback in a BIG EAST game. Miami also came from 13 points down in the second half to defeat Georgetown on January 18, 1997. The game also marked the second straight in which Miami overcame a double-figure second-half deficit to win. Miami was down 11 in the second-half to Pittsburgh before rallying for a 76-69 double-overtime win. Overall the Hurricanes have rallied eight times from second-half deficits to win games.

LATE SEASON HEAT WAVE:
Over the last three seasons Miami has played well in the month of February registering a 22-4 (.846) record.

TALKING RPI:
As of February 7 the Hurricanes were No. 11 in the RPI rankings according to CollegeRPI.com. Miami’s ranking is the highest among BIG EAST schools.

The BIG EAST Conference currently has 11 teams ranked among the top-75 in the RPI which is the most of any conference in the nation. The SEC is second with 10 while the Big Twelve and Big 10 are next with seven each. The Pac-10 and Conference USA follow with six appeace. The ACC and Atlantic 10 currently have five teams each.