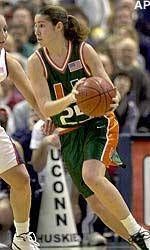 VILLANOVA, PA. – The Miami women’s basketball team fell on the road Tuesday night to Villanova, 80-52, in a BIG EAST loss at The Pavilion.

Villanova shot out of the gates, rolling to an 18-5 lead just 10:44 into the contest, behind seven early points from junior guard Trish Juhline. Miami would close the gap to eight points, 18-10, at the 9:25 mark as Meghan Saake capped a 5-0 run with a three-pointer.

The Wildcats maintained control and took a 32-20 advantage into intermission.

Villanova was led in the first half by Katie Davis, who scored 12 points on four-of-six shooting from three-point range. Juhline and senior guard Mimi Riley each added seven points, while Saake led the way for the Hurricanes with 12.

Davis set new career-highs in points with 28 and three-point field goals with seven. She shot nine-of-13 from the field for the game and seven-of-11 from three-point range. Scoring in double-figures as well for the Wildcats were Juhline with 15, Riley with 11 and sophomore forward Courtney Mix with 10 points to go along with six boards, five assists and four steals.

In the loss, Saake led Miami with 16 points and six rebounds, while Chanivia Broussard added 15.

The Hurricanes return home to host Pittsburgh Saturday at 3 p.m.