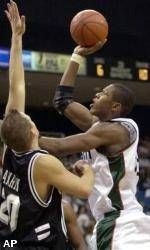 MIAMI (AP) – Darius Rice scored 32 points, including a basket near the endof regulation, and John Salmons and James Jones added 23 each Saturday, helpingNo. 24 Miami rally to a 102-96 overtime victory against Providence.

The Hurricanes (17-2) overcame an 11-point halftime deficit and won for thesecond straight game in overtime, following Tuesday’s 76-69 double-overtimevictory against Pittsburgh.

Providence (10-9) got 31 points from Ryan Gomes, but the Friars couldn’tcontain Miami’s Rice, Salmons and Jones.

Rice put Miami ahead 89-86 with a 3-pointer with 5.7 seconds left inregulation. But Abdul Mills hit a running 3-pointer at the buzzer to forceovertime.

The Hurricanes outscored the Friars 7-1 to begin the extra period, withJones’ layup putting Miami ahead 95-90 with 2:48 left.

Providence drew to 98-96 on John Linehan’s shot from the corner with 35seconds left. Michael Simmons hit a pair of free throws with 23 seconds to goto give Miami a 100-96 lead, and the Friars were unable to score on three openlooks in the closing seconds.

Providence responded with an 18-8 run to build a 74-67 lead. Gomes scorednine points during the surge and Mills and Sheiku Kabba each hit 3-pointers toput the Friars in front.

Miami ran off five straight points, pulling within 74-72 on Salmons’ 3-pointbasket with 6:22 left. A basket by Elton Tyler pulled Miami within 81-78 with4:04 left, but Providence replied with a 3-point basket by Maris Laksa with theshot clock winding down for an 86-81 lead.

However, Rice hit a 3-pointer, and Salmons scored from inside to tie it86-86 with 51 seconds left. Rice seemed to have won the game for Miami with hisbasket, but Mills answered with his own basket to force overtime.

The Friars shot 58 percent in the first half en route to a 48-37 lead. Gomesscored 16 points, most from close range as the Friars kept broke down Miami’sinside defense for easy baskets.

Mills scored 18 points for Providence, and Linehan and Laksa followed with15 and 14, respectively.