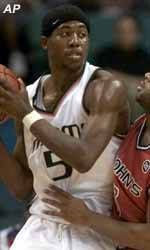 The Hurricanes are 13-0, the second-longest winning streak in schoolhistory. Miami opens its Big East schedule Wednesday at Georgetown.

Miami moved ahead 14-2 in the first seven minutes and was never threatened.Salmons had five points in the spurt and scored 14 points in powering Miami toa 42-22 halftime lead.

The Hurricanes did not allow a Red Flash field goal in the final sevenminutes of the game.

For Miami, Marcus Barnes finished with 12 points, including 3-of-7 from3-point distance. Elton Tyler added 10 points and four blocks. The Hurricaneshad a season-best 10 blocks.

Reiner Mougnol led St. Francis (2-7) with 13 points, while Steveroy Daleyscored 12 points, all in the second half.

In the second half, the Red Flash cut Miami’s advantage to 58-47 on RodneyGibson’s basket and free throw with 7:22 remaining.

But the Hurricanes responded with a 10-0 run in the next four minutes.Darius Rice keyed the run with a 3-point field goal and a follow off his missedlayup.