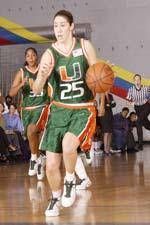 CORAL GABLES, Fla.-Meghan Saake (Wellington, Fla.) was named Most Valuable Player of the Gatorade Holiday Classic after leading the University of Miami women’s basketball to a 75-46 victory over Yale to claim the championship title Friday night at Knight Sports Complex.

Miami (8-2) remains a perfect 6-0 at home this season, winning the tournament for the second year in a row. Yale falls to 6-4 on the season.Bowling Green (3-8) claimed the consolation title after defeating Lehigh (4-7) 63-55 in the first game of the afternoon.

For the second year in a row junior Alicia Hartlaub (Schaefferstown, Pa.) was named to the all-tournament team. She averaged 11.5 points, six rebounds and three blocked shots in the tournament.

The Hurricanes pieced together a 10-0 run with 6:18 on the clock and another 10-0 run in the remaining minutes of the first half to take a 16-point lead (40-24) into the locker room at halftime.

The win marks the fifth in a row for the Hurricanes and the best start since the 1991-92 season when Miami went 30-2 and won the BIG EAST title.

The Hurricanes are back in action Sunday as they play host to Minnesota at 3 p.m. in Knight Sports Complex.