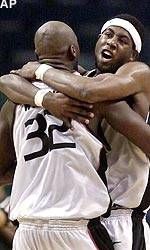 NEW ORLEANS – Miami tries to justify its first national ranking of the season Thursday as it plays LSU in the nightcap of the Sugar Bowl Classic at New Orleans.

The 24th-ranked Hurricanes (11-0) are off to the best start in school history and are one of just five remaining unbeaten teams in Division I men’s basketball. This is Miami’s first time in the Top 25 since finishing the 1999-00 regular season at No. 23.

Perry Clark’s team has done it mostly with defense in the early season, holding opponents to 37 percent shooting and 61.2 points per game.

The Hurricanes are venturing outside of Miami for just the third time. They won three games at the Paradise Jam in the U.S. Virgin Islands to start the season and won at Texas A&M on Dec. 9.

Miami wrapped up a three-game homestand with a 64-56 victory over Charlotte on Saturday. John Salmons finished one rebound shy of becoming the first player in school history to record a triple-double, finishing with 15 points and 10 assists.

He also became the 24th player in school history to reach the 1,000-point plateau, and his 10 assists made him the first player to record double figures in assists in consecutive games in Miami history. The senior guard is averaging 12.1 points, 6.6 rebounds and 5.6 assists.

LSU (9-2) appears to be on the upswing again after a disappointing 13-16 record in 2000-01. The Tigers, who went 28-6 and reached the regional semifinals of the 2000 NCAA tournament, have not played a demanding schedule, and the Hurricanes represent their strongest test of the season to date.

John Brady’s team is trying to build off the momentum of a 73-69 victory over Houston last Thursday. Collins Temple III scored 17 of his 22 points in the second half for the Tigers, successfully bouncing back from a one-game absence due to a sprained ankle.

Temple leads the team in scoring at 17.8 points per game and is one of three options offensively for LSU. Forward Ronald Dupree (16.5 ppg, 7.9 rpg) and guard Torris Bright (13.2 ppg, 5.5 apg) have teamed with Temple to take almost 60 percent of LSU’s shots this season.

Miami leads the all-time series 2-1, but this will be the first meeting between the teams since 1957.