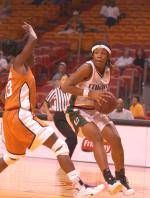 CORAL GABLES, Fla.-Sophomore Chanivia Broussard was named BIG EAST Player of the Week after leading the University of Miami women’s basketball team to a 2-0 week, including a win over No. 17 Texas.

Broussard averaged 19.5 points, 3.0 rebounds, 4.5 blocks and 4.0 steals in a thrilling week for the Hurricanes.

She scored a season-high 23 points and added six blocks and five steals in UM’s 57-55 upset win over the Longhorns in the Orange Bowl Classic. Broussard was named tournament MVP for her efforts.

In a 69-53 BIG EAST win over West Virginia, she came off the bench to contribute 14 points, four rebounds, three blocks and three steals.

Miami is back in action Saturday travelling to face FAU at 3 p.m. in Boca Raton.