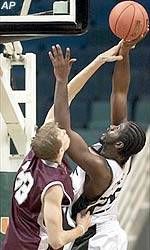 TONIGHT’S OPPONENT:
Florida Atlantic enters tonight’s contest with a record of 1-1 following a 107-73 win over St. Mary’s on November 20. The Owls were led by senior forward Daryl Dingle who poured in 22 points and pulled down nine rebounds.

THE SERIES:
Miami and Florida Atlantic meet for the 15th time with the Hurricanes taking all 14 previous meetings. Last season Miami registered an 76-59 win at FAU Gymnasium. Miami is 8-0 versus the Owls at Miami Arena. Miami’s 14 game win streak against FAU is the six longest in UM history against one opponent.

UP NEXT:
Following tonight’s game Miami continues its four-game homestand against Howard University on Thursday, November 29 at 7:30 p.m. Miami finishes out its homestand against Florida International on Monday, December 3 (7:30 p.m.).

A WIN TONIGHT WOULD:

Mark Miami’s first 5-0 start since the 1997-98 season (9-0).Mark the Hurricanes’ 15th consecutive win over FAU.Mark UM’s 25th straight win over teams from the state of Florida.

LAST SEASON AGAINST FAU
Darius Rice poured in a game-high 26 points to lead the University of Miami to a 76-59 season-opening win over Florida Atlantic in Boca Raton, FL.

Rice, who connected on 8-13 from the field, including 5-9 from three-point range, recorded the most points by freshman in a season-opener since the rebirth of the program in 1985.

Miami, which improves to 14-0 all-time against FAU, has won eight consecutive season openers and 23 consecutive games against teams from the state of Florida.

TV/RADIO COVERAGE:
Tonight’s game is not being televised. The game is being broadcast on the Hurricane Radio Network (WQAM-560 AM). Marc Vandermeer, entering his third season as the “Voice of the Hurricanes,” will handle the play-by-play duties while Joe Zagacki will provide in-depth analysis.

ON COACH PERRY CLARK:
University of Miami head coach Perry Clark is in his second season with the Hurricanes and 13th season overall as a collegiate head coach. Clark is 20-13 (.606) in his second season at Miami while his career record in 13 seasons stands at 205-158 (.565). Last season Clark led the Hurricanes to a berth in the National Invitation Tournament marking the eighth time in 12 seasons he has guided his team to post season play.

AGAINST THE ATLANTIC SUN:
Miami is 87-40 (.685) all-time against teams currently in the Atlantic Sun Conference (formerly the TAAC). Miami has won 23 consecutive games against Atlantic Sun/TAAC teams and has not lost to an Atlantic Sun opponent since a 72-64 season opening loss to Florida International on December 1, 1992.

STREAKING:
Miami’s current 14 game winning streak over Florida Atlantic ranks as the fifth longest over one opponent in UM history.

MIAMI TAKES FIRST TITLE SINCE 1988:
Miami’s victory over Clemson in the championship game of the Virgin Islands Paradise Jam marked UM’s first tournament title since the 1988 season when the Hurricanes took home the title at the Eastern Airlines Palm Beach Classic. That season UM defeated Penn, 102-69, in the opening round, then knocked off Wichita State, 81-59, in the championships game.

The Naismith Awards program, now in its 34th year, honors the outstanding college basketball player in the United States. The awards program was founded by the Atlanta Tipoff Club, an organization dedicated to recognizing the achievements of student athletes in basketball.

MIAMI vs. NON-CONFERENCE OPPONENTS:
Since becoming the 10th member of The BIG EAST Conference beginning with the 1991-92 season, the Hurricanes have compiled a 65-35 (.650) record against non-conference opponents, including a 45-13 mark (.776) at the Miami Arena.

AMONG THE ELITE:
Since the start of the 1996-97 season UM has compiled a 48-22 (.686) record in BIG EAST regular season games tying Connecticut for the best conference mark over that period.

LOOKING FOR 1,000:
Miami seniors John Salmons and Elton Tyler are nearing the 1,000-point plateau for their careers. Salmons (929 points) needs 71 points while Tyler (602 points) needs 398 points this season. Miami has had 23 players score 1,000 or more points including Rick Barry who holds the Miami career scoring record with 2,298 points.