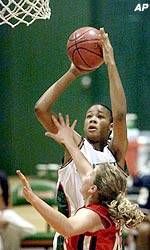 The Hurricanes trailed 33-24 at the half after leading by as many as five points early in the game. The Premier Players, a team made up of WNBA players, jumped out in the second half and took a 20-point lead with 11 minutes left to play in the game.

The Premier Players expanded their lead to a game-high 25 points with two minutes left in the game, the Hurricanes went on an 11-0 run with one minute remaining in the contest but time expired as the Premier Players completed their exhibition tour a perfect 7-0.

Sophomore Shaquana Wilkins came off of the bench to score 10 points and pull down six rebounds for UM.

Lisa Shephard led the Premier Players with 19 points and seven rebounds, while twin sisters Coco and Kelly Miller hit for 14 points a piece.