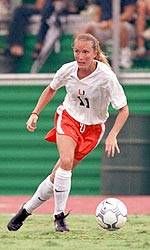 The Hokies scored first as Ryan Johnson knocked one in at 18:43 to put VT on top by one.

Miami was quick to answer back scoring less than a minute later. Freshman Anik Huffman (Winter Park, Fla.) passed the ball to senior Alexis MacKenzie (Plantation, Fla.) as she scored the match-tying goal.

The match was knotted one-all at halftime. The Hurricanes came out strong the second half, both Deidre Bass (Coral Springs, Fla.) and Britney Butcher (Bothell, Wash.) had shots bounce off of the crossbar in the effort.

Both teams played a lot of defense in the second overtime period. After 120 minutes of play the match ended in a 1-1 tie.

The Hokies outshot the Hurricanes 19 to 14. UM took eight corner kicks, compared to four for VT.

Miami is back in action Sunday at 1 p.m. facing West Virginia in Morgantown, WV.