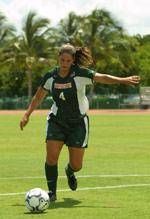 Laura West (Allen, Texas) scored her eighth goal of the season and the first of the match at 9:05 on an assist from Britney Butcher (Bothell, Wash.) to put Miami on top by one.

Less than 20 seconds later the Hurricanes gave up an unassisted goal on a misplay by a defender to tie the match one-all. Carolyn Iacobelli scored the goal for BC.

The Hurricanes did not stay down for long, less than six minutes after BC scored Allison McWhinney (Danvers, Mass.) scored on a pass from Anik Huffman (Winter Park, Fla.) knotting the match two-all.

The Eagles were quick to answer back scoring their third goal of the match 16 seconds later. Sarah Rahko scored the unassisted game-winning goal for BC.

Rahko scored again at 44:33 on a pass from Kristen Goddard.

The Hurricanes came out strong the second half outshooting BC 11 to seven. UM held BC scoreless in the second-half but failed to score itself, falling to BC for the third year in a row.

The Eagles outshot Miami 21 to 13, and took eight corner kicks compared to only two for UM.

Miami will battle Providence Sunday afternoon on the road at 1 p.m.