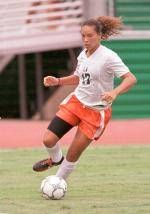 Soccer Improves To 3-0 On The Season

CORAL GABLES, Fla.-The University of Miami soccer team earns its first shutout of the season with a 3-0 win over visiting Florida Atlantic in the 2001 home opener at Cobb Stadium Tuesday night.

Miami improves to 3-0 on the season, while the Owls drop their first match of the year, falling to 2-1 overall. UM leads the all-time series with FAU 4-0.

The Hurricanes controlled the tempo of the match, outshooting FAU 20 to six.

McWhinney scored the final goal for the Hurricanes at 80:22 on a penalty kick awarded to UM.

Junior goalkeeper Rachel Elsby (Boca Raton, Fla.) improves to 3-0 on the season making three saves on the night. She also adds another shutout to her all-time Miami career shutout record with 9.5 in her career.

UM took four corner kicks on the night, while holding FAU to zero.

Miami is back in action Friday night traveling to face Central Florida.