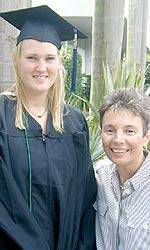 The native of Sodertalje, Sweden was a four-year letterwinner at Miami and was named to the BIG EAST Academic All-Star team all four-years of her career.

Osth made 108 appearances during her career and averaged 3.5 points per game. She was selected as the Miami Athletic Department Academic All-Star for the month of March 2001.

Osth maintained a 3.53 GPA at Miami and graduated in May with a degree in Marketing.