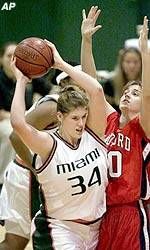 The heartbreaking loss not only dropped Miami to below .500 on the season, it dropped the Hurricanes from a possible No. 7 seed in the BIG EAST Tournament to the No. 10 spot.

Miami will play the No. 7 seed Boston College in the first round of the BIG EAST Tournament Saturday at 6 p.m.

Seniors Clarke, Dona Nando (Queens, NY) and Camilla Osth (Sodertalje, Sweden) were honored in a pre-game ceremony in the final home game of the their careers.

The Hurricanes opened the game on a 4-0 run and never lost the lead, taking a 37-21 advantage into the locker room at halftime. The Hurricanes shot 56.7% from the field in the first half, compared to 29.6% for the Wildcats.

The Hurricanes missed a lay-up in the final seconds of the game to give the Wildcats their 20th victory of the season.