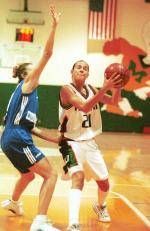 Miami improves to 1-0 on the season, while FAU falls to 0-2. The Hurricanes are undefeated against the Owls, boasting an impressive 12-0 all-time record.

UM shot 44.2 percent from the field in the first half to build a 45-20 halftime lead and cruised from there.

Miami opened the game with a 21-4 run and continued to build the lead throughout the first half. The Hurricanes proved too much for FAU closing out the game with a 37-point lead.

Miami scored 42 points on 42 turovers by FAU. Miami shot 42.0 percent from the field for the game, compared to 25.5 percent for FAU.

The Hurricanes are back in action traveling to face Northwestern Friday night at 7 p.m. in Evanston, Ill.