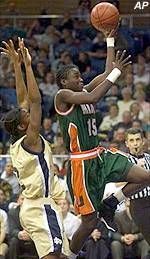 The problem, she said, was that the Irish still hadn’t gotten over theirhigh from beating Rutgers in overtime last weekend.

“We did what we had to do when we had to do it and now we can get ready forthe big game on Saturday,” McGraw said.

Notre Dame (24-2 overall, 15-0 Big East) plays at No. 1 Connecticut onSaturday for the conference title. The Irish are 0-10 against the Huskies sincejoining the Big East and have never won the conference crown.

The Irish looked like anything but one of the top two teams in the Big Eastas Miami (11-14, 5-9) tied the game at 36-36 less than a minute into the secondhalf after trailing by as many as 12 points in the first period.

Then Riley took over.

Up 49-45, the Irish went on a 17-5 run that Riley kick-started by hittingtwo free throws, blocking a shot and then converting a three-point play. Shehad 13 points and one assist in the run.

“That was the thing that we kept telling our kids, that we can’t let Ruthget into the paint and be there, because she didn’t have to make an offensivemove. She just caught the ball and made the turn,” Miami coach Ferne Labatisaid.

That put Riley at the line, where she was set school records with 18 freethrows and 23 attempts. The latter was also a league record.

“I don’t know if I was really looking to draw contact. I was just lookingto get a good turn and a good angle on the basket,” Riley said. “I felt likeI forced a couple shots early in the first half and got blocked a couple times.I just wanted to change that in the second half and be a little more aggressivein attacking the basket.”

Riley had to carry a team that seemed sluggish three days after beatingRutgers 78-74. Freshman Alicia Ratay had 26 points against Rutgers, includingtwo 3-pointers that put the game into overtime. But she had just five pointsagainst the Hurricanes, while Niele Ivey, who averages 10.8 points, had justthree.

Ericka Haney also picked up the slack with 15 points, more than twice her6.6 average.

“I just think that Rutgers game was so spectacular and the finish thatwe’ve been kind of on a high since that game,” McGraw said. “I don’t think itwas in anyway looking past Miami, looking to Connecticut. I think we were stillthinking about Rutgers.

“It was really hard to get that intensity and emotion because we werereally drained after that game.”

Osth finished with 16 points for the Hurricanes, and Dalia Clarke – who alsohad four fouls – had 15.