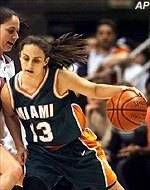 Miami Falls To No. 1 Connecticut

STORRS, Conn. (AP) – Center Kelly Schumacher made the most of her secondstart for top-ranked Connecticut with a career-high six blocks on Tuesday asthe Huskies routed Miami 93-46.

The 6-foot-5 Schumacher got the call after starting center Paige Sauersprained her right foot last week. While Schumacher shut down the middle, theHuskies’ speedy transition game quickly outdistanced the overmatchedHurricanes.

Connecticut outrebounded Miami 43-29, and Schumacher was one of four Huskieswith six rebounds. She finished with eight points. Her last start was Nov. 21in the regular season opener against Iowa. She was held scoreless and finishedwith three rebounds and one block.

Abrosimova had 14 of her 19 points in the first half as the Huskies took a55-22 lead at the break.

The second half was much the same as Connecticut scored the first threebaskets of the half off transition.

Asjha Jones and Shea Ralph had 16 and 15 points, respectively, forConnecticut.