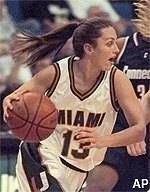 Hurricanes Humbled By No. 1 UConn

The Huskies (19-0, 8-0) continued to prove that they are bigger, faster andbasically better than the rest of the nation.

They will get another chance to show it Wednesday against the No. 4Volunteers. UConn beat Tennessee earlier this year and are 8-0 against rankedteams.

“Tennessee will be a different type of test, a real test,” UConn coachGeno Auriemma said.

“Miami’s just not in a position right now with their kids to make it verydifficult for us,” Auriemma said.

Ralph took much of the second half off, but the Huskies didn’t let up. Theyshot 56 percent from the field and had two players with perfect shooting games.

Sue Bird scored 20 points on 7-for-7 shooting, including 4-for-4 from3-point range, and Tamika Williams went 4-for-4 from the floor and added 12points. Neither player missed from the free throw line.

Miami, meanwhile, struggled to score throughout the game, shooting just 19percent (12-for-62). Camilla Osth led the Hurricanes with 14 points.

“We’re hurting offensively,” said Miami coach Ferne Labati, who apologizedfor her team’s performance. “We take a good shot and it turns into a bad shotbecause of the way we’re shooting the ball.”

The only easy basket Miami got was when the Huskies failed to return to thecourt following a timeout, leaving Alicia Hartlaub with an uncontested layup.UConn apparently didn’t hear the 30-second warning and didn’t see the refereeswhistle the ball inbound.

It did little to change the momentum of the game, though, as UConn cruisedto its 12th straight win over Miami.

“We need more scoring,” said Miami guard Gina Graziani, who scored fivepoints. “We’re averaging 35 points a game the last two games, and that’s notgoing to get us any wins.”