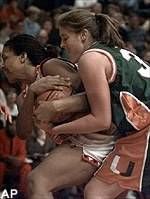 Women's Hoops Falls To No. 11 Rutgers

PISCATAWAY, N.J. (AP) – Shawnetta Stewart scored 13 of her 15 points in thesecond half as No. 11 Rutgers shut down Miami in the final 8:20 for a 65-45 BigEast Conference victory Wednesday night.

Stewart left the game just seven minutes into the first half with a deepthigh bruise just above the left knee. She returned in the second half and,after a few tentative minutes, began to assert herself with drives to thebasket and long-range shots.

Alicia Hartlaub made two free throws with 8:20 to play, but it would be thelast points Miami would score as Rutgers relied on defense and the Hurricanes’poor shot selection.