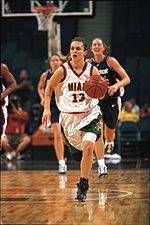 CORAL GABLES, Fla. – The University of Miami women’s basketball teamfell to Ferencverosi Torna, 84-68, in an exhibition game held at the KnightSports Complex on Sunday.

Despite holding a 34-31 lead at the half, the Hurricanes fell victimto a 27-7 run by Ferencverosi Torna to open the second half. UM pulled towithin 10 with just under five minutes left in the contest but were unableto get any closer.

Sheila James led UM with a game-high 25 points, shooting 7-for-13from the field including 4-for-8 from the three-point line. She also ledthe team in rebounds with eight. Point guard Gina Graziani followed with a17-point effort in 37 minutes of play.