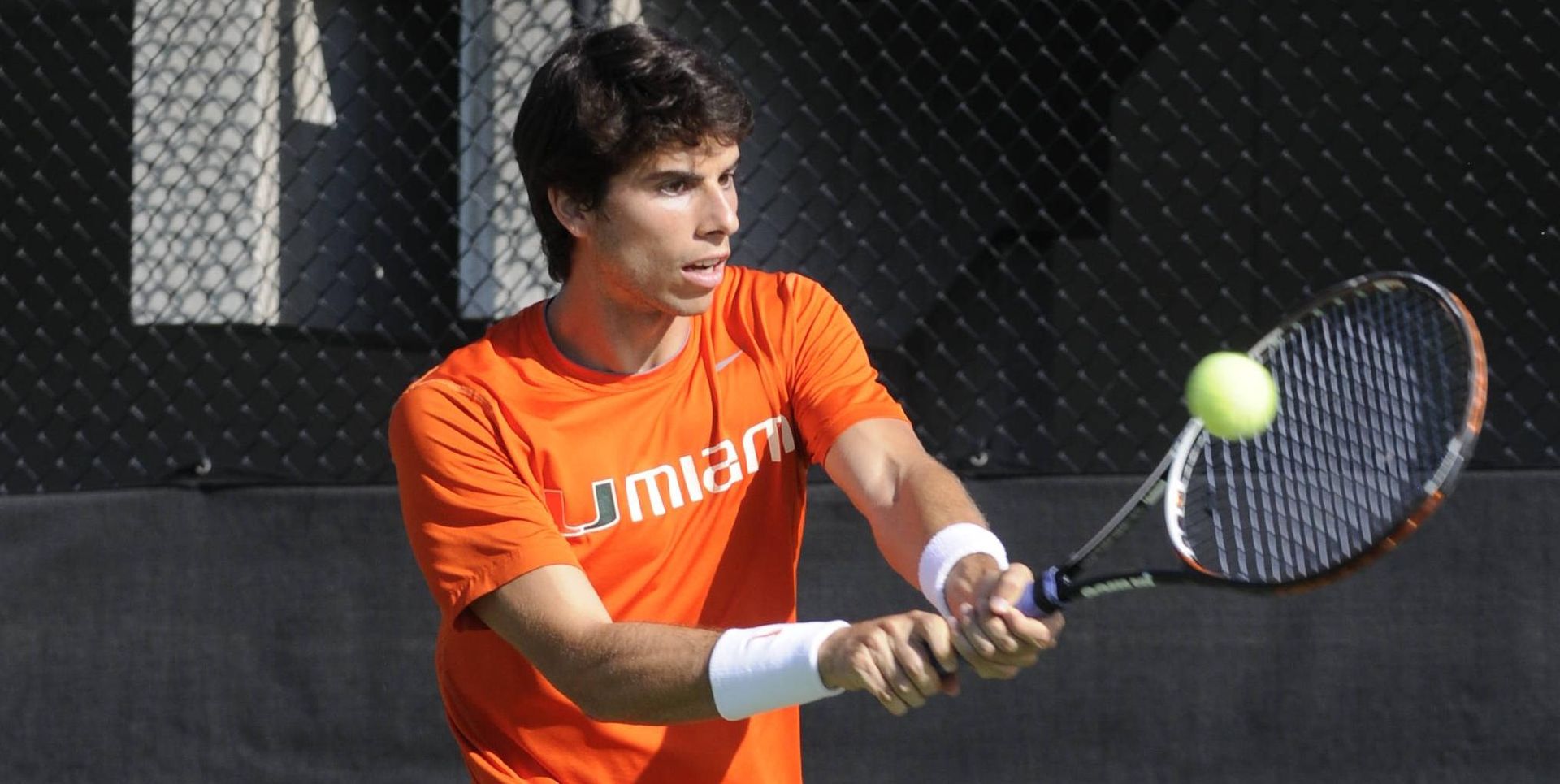 “Our guys are a very strong unit,” head coach Mario Rincon explained. “Every player wants to win for the team and for each other and it shows on the court. It is a pleasure for us coaches to have a group that is always going to fight and put their best effort on the court.  Today was an example of that, our guys were strong and got the victory.”

Miami grabbed an early 1-0 lead with solid play on all three doubles courts.  It was Miami’s second doubles pairing of Gabriel Flores and Diego Soto that set the tone, as the two juniors cruised to a quick 8-3 win over Georgia State’s Thomas Cook and Paul Schuette.  Moments later, Miami’s No. 3 duo of Henrique Tsukamoto and Marco Stancati clinched the doubles point for the Canes with an 8-5 victory over Robert Schulze Sofiane Chevallier.

“Today we came out really strong in doubles,” Rincon said.  “We know that our doubles have gradually gotten better.  We have played some tough opponents in doubles and loss some close doubles matches but we know that we have improved and today it showed.”

Wilfredo Gonzalez and Omar Aly had a 6-5 advantage over Victor Valente and Lucas Santa Ana when doubles play was halted on court one.

Singles competition featured a trio of straight set wins for the Hurricanes.  Diego Soto dominated his match at No. 2 singles, as he relinquished only one game on his way to a lopsided 6-1, 6-0 victory over Thomas Cook, giving the Canes a 2-0 lead.

The Canes took a 3-0 lead after Marco Stancati won a close 7-6, 6-4 decision over Sofiane Chevallier at No. 5 singles.

For the second straight match, junior Omar Aly clinched the winning point for the Canes.  The Edmond, Okla., native cruised past Robert Schulze in the first set, 6-3, before finishing him off with a close 7-6 win in the second frame to secure the victory for Miami.

“One of the main things Omar has improved in the last year or so is his conditioning and stamina,” Rincon said.  “He is able to last out there and we feel confident he can put away matches that are really long.  He plays a very aggressive style of game that is very demanding of his body.  Now he is able to manage that and he is always in good shape when it is late in the match.”

Victor Valente got Georgia State on the board with a 7-6, 6-3 victory over Miami’s Gabriel Flores at No. 1 singles.  It proved to the Panther’s only point of the afternoon as Miami won both remaining courts.

Miami got its fifth point from court six, as William Albanese won a hard fought three set match at over Paul Schuette, 3-6, 6-2, 6-4.

Wilfredo Gonzalez rounded out Miami’s scoring with another three set victory at the No. 3 position, downing Lucas Santa Ana, 4-6, 7-5, 1-0(7).  Today’s win gave the sophomore his team-leading 13th singles win on the dual season.

“We caught them a little off guard today,” Rincon said.  “We were very aggressive and set a tone from the start of the match.”

The Hurricanes will have a quick turnaround before taking the court for a match against instate-rival No. 16 Florida State on Sunday, March 24 in Tallahassee, Fla., at 12 p.m.