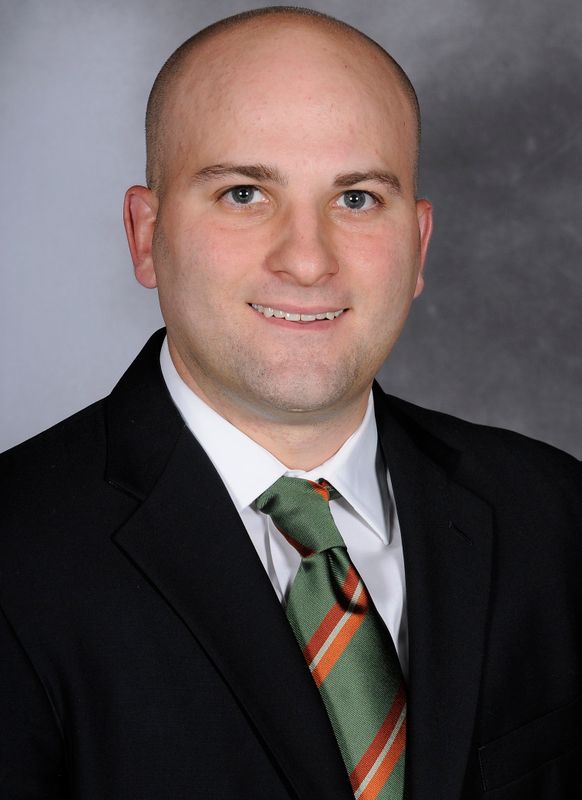 Chris Caputo is in his 10th season with the Hurricanes and his 19th year on head coach Jim Larrañaga’s staff in 2020-21. He has worked 15 prior seasons as an assistant coach, with his primary responsibilities including recruiting and scouting the opposition. In May 2015, Caputo was elevated to associate head coach at Miami and also took on the role as the team’s defensive coordinator.

In his nine seasons at The U, Caputo has coached the Hurricanes to six postseason berths, four NCAA appearances and two Sweet 16 nods. He helped Miami claim the 2013 ACC regular season and ACC Tournament titles, as well as earn a spot in the 2015 NIT title game. During Caputo’s tenure, the Hurricanes have three 25-win seasons and achieved a national ranking as high as No. 2.

In July 2020, Caputo’s ACC coaching peers named him a top-five assistant in the league in a poll conducted by Stadium. This followed Silver Waves Media tabbing him a top-50 high-major assistant coach in April 2020 and Yarbarker listing him as one of 10 assistant coaches on the rise in November 2019.

Previously, in August 2017, a CBS Sports poll of 100-plus college coaches ranked Caputo as one of the three assistants in the nation most likely to someday become a coaching star, as he garnered 10.2 percent of the vote. Locally, the city named Feb. 24, 2015, Chris Caputo Day in Coral Gables. In 2014, Sports Illustrated mentioned Caputo as one of the top 20 assistants ready to make the jump to a head coaching position.

Under Caputo’s tutelage, Miami was one of just two ACC schools, along with Duke, to have a player selected in the NBA Draft each year from 2016-19, with Dewan Hernandez (formerly Huell) the most recent.

Miami went 22-10 during the 2017-18 season while reaching the NCAA Tournament for the third straight season, matching a program record. After finishing 11-7 and tying for third place in conference play, the Hurricanes earned the No. 6 seed in the NCAA South Regional. Walker had a strong freshman campaign, earning Honorable Mention All-ACC and ACC All-Freshman Team honors. Walker and Brown each were selected in the NBA Draft following the season, as Walker was a first-round pick (No. 18 overall), while Brown was picked No. 42 overall.

For the third straight season, Miami sold out its season ticket allotment at the Watsco Center. The 2015-16 season was the first time in Miami Hurricanes history that any team sold out of season tickets.

In 2016-17, Miami played in the NCAA Tournament, earning the eighth seed in the Midwest Region. The Hurricanes finished the season 21-12 overall and tied for seventh in the ACC, posting a 10-8 record in the league. Miami defeated three ranked teams, downing No. 9/6 North Carolina and No. 10/11 Duke in Coral Gables, as well as No. 18/19 Virginia on the road. It was the third straight year and the fifth time in six seasons that the Canes defeated two top-15 teams.

That season, Caputo worked closely with fourth-year senior Davon Reed and freshman Bruce Brown Jr. Reed was the recipient of the 2017 Skip Prosser Award, presented annually to the top scholar-athlete in ACC men’s basketball. A 1,000-point scorer (1,343) at Miami, Reed was also named third team All-ACC and was listed on the ACC’s All-Defensive Team. Brown recorded a triple-double with 11 points, 11 rebounds and 10 assists against South Carolina State on Dec. 6, which was the second triple-double in program history at Miami. Brown was also named to the All-ACC Academic Team.

In 2015-16, Caputo coached the Hurricanes to a tie for second in the Atlantic Coast Conference regular season standings and an appearance in the Sweet 16 of the NCAA Tournament. Miami earned a No. 3 seed in the Big Dance and ended the season ranked No. 10 by the Associated Press and No. 8 in the USA Today Coaches Poll. The Canes’ 27 overall wins were the second-most in school history and 13 ACC wins were highlighted by a perfect 9-0 league mark at the BankUnited Center, thanks in part to a sold-out arena every night, the first time in program history a team has sold out season tickets for its campaign.

Miami won the 2015 Puerto Rico Tip Off, defeating No. 16 Utah, No. 22/20 Butler and Mississippi State by 20.0 points per game and downed three other ranked teams during the season in No. 3 Virginia, No. 11 Louisville and No. 24/20 Duke. The Canes also won their ACC/Big Ten Challenge game at Nebraska and defeated in-state rival Florida, which was receiving votes at the time.

Caputo led Miami to the third-best effective field goal percentage (48.3) in the league and improved the Canes’ defensive efficiency from No. 76 to No. 47 in the nation in just one season. In ACC games the Hurricanes posted the third-best scoring defense in the league (65.9 ppg) under the watch of Caputo.

Caputo coached senior Sheldon McClellan, who was the seventh-most efficient offensive player in the nation among players with 20 percent-or-more possessions used, according to KenPom.com. He was also the third-most efficient player in the ACC overall and No. 26 in the nation. McClellan was 17th in the ACC (league games only) in 2-point field goal percentage (54.6), ninth in true shooting percentage (60.7) and 10th in free throw percentage (83.5). McClellan was named to the USBWA All-District Team, All-ACC second team and ACC All-Tournament Second Team for his stellar season.

After a 20-11 mark in the regular season, the 2014-15 Hurricanes went on to win four straight postseason games, earning a spot in the NIT Championship game in Madison Square Garden. Miami’s 25 wins are the second-most in program history, behind UM’s 29 in 2012-13. In January, the Canes downed eventual national champion then-No. 4 Duke, 90-74, at Cameron Indoor Stadium, the only team to defeat Duke at home this season. Miami also defeated No. 8/7 Florida and Syracuse on their home courts, two of Miami’s 10 regular season wins away from home. With primary duties of handling the scout for all opponents, Caputo led Miami to fourth in the ACC in scoring defense (63.2 ppg). Under the tutelage of Caputo, junior forward Tonye Jekiri was named to the All-ACC Defensive Team and along with classmates Sheldon McClellan and Angel Rodriguez, all three were honorable mentions to the All-ACC team.

With no starters returning from the 2013 ACC Championship squad, the Hurricanes finished the 2013-14 season No. 11 in scoring defense and No. 39 in field goal defense in the NCAA. Caputo helped guide Miami to its seventh-consecutive winning season, taking five of the last eight games. The Canes finished the 2013-14 season 17-16 (7-11 ACC), with five overtime contests and 13 games decided by five points or less, despite returning only 13 percent and 15 percent of the team’s scoring and rebounding, respectively. Led by five seniors, Miami’s defense was among the best in the conference, finishing second in field goal defense (40.7%) and third in scoring defense (59.6 ppg). Five Hurricane seniors graduated from the hoops program for the second-straight year.

Caputo and the Hurricanes posted a historic season in 2012-13, winning the ACC regular season and tournament championships, then playing in the Sweet 16 after earning a No. 2 seed in the NCAA Tournament. Miami was ranked as high as No. 2 in the country this season, winning 29 total games, including 15 in ACC play. He helped lead Miami to four 20+ point wins over ACC opponents, including a 27-point rout of No. 1 Duke and victories against North Carolina (+26), Florida State (+24) and Boston College (+22).

The team’s scout-team coordinator, Caputo coached the Canes to top 50 national rankings in turnovers per game (12th), scoring margin (33rd), scoring defense (39th) and field goal percentage defense (48th). He also helped Miami to 10 road wins and a 14-1 mark at home with his intricate knowledge of opponents’ tendencies and styles.

Caputo worked daily with All-American and ACC Player of the Year Shane Larkin, as well as ACC Defensive Player of the Year Durand Scott and All-ACC performer Kenny Kadji. Larkin, the Lute Olson National Player of the Year, was also ACC tournament MVP and was a finalist for the Bob Cousy, Naismith and John R. Wooden awards. Larkin left UM after his sophomore season to enter the 2013 NBA Draft.

All six seniors on the Sweet 16 team earned academic degrees from the University of Miami and one player was listed on the All-ACC Academic Team.

After his first season as an assistant coach with the Hurricanes, Caputo is already able to look back at a year that was filled with memorable accomplishments. With his assistance, the team recorded nine ACC wins, amounting to a winning record in conference play for the first time since the program joined the ACC for the 2004-05 campaign. The Canes ultimately tied for fourth in the league standings, the highest the team ever finished in the ACC. Although Miami had some quality wins throughout the regular season, the team’s 1-1 record in the ACC Tournament was not enough to get UM to the NCAA Tournament. Instead the team bested Valparaiso in the NIT, before losing to the eventual NIT Championship runner-up, Minnesota.

One of the highlights of the entire season was when Miami beat No. 7/5 Duke at Cameron Indoor Stadium on Feb. 5, 2012, to earn the program’s first ever away victory over the Blue Devils. UM’s Reggie Johnson led the team to 78-74 overtime win, scoring 27 points and snagging 12 boards. As a result, the Canes earned themselves national recognition by getting their first votes in the AP Poll since 2010. The Hurricanes then defeated rival FSU, ranked No. 15/16 at the time, in front of a raucous UM crowd at the BankUnited Center. The victory was UM’s first win over the Seminoles since 2009.

Individually, Kenny Kadji, Durand Scott and Shane Larkin stood out by receiving a variety of honors: Kadji was chosen for the All-ACC Third Team, Scott was recognized as an All-ACC honorable mention performer and Larkin was voted onto the ACC All-Freshman squad.

Caputo played a major role in George Mason’s run to the Final Four in 2006, putting together scouting reports to prepare the Patriots as they played nationally-ranked teams and future NBA players in nearly every round.

He also helped lead the Patriots to the postseason for a Mason-record four-straight seasons, including NCAA berths in 2008 and 2011. In 2011, the team defeated Villanova to advance to the third round of the NCAA Tournament, earned a regular-season CAA title and posted a school-record-tying 27 wins. In 2009, he helped Mason to an NIT bid and its second-straight 20-win season and, in 2008, Caputo helped the Patriots to their second-highest win total in school history as they beat nationally-ranked Kansas State and won the CAA title for the first time since 2001.

During his time at Mason, he was named by Hoopscoop.com in 2008 as one of the top 25 non-BCS assistant coaches in the nation. From 2010-15, Caputo attended the Villa 7 Consortium, an educational symposium and networking opportunity for some of the nation’s top assistants.

Prior to becoming an assistant coach, Caputo worked on Larrañaga’s staff as the video coordinator, coordinated the staff recruiting database and mailing system, as well as serving in other administrative capacities.

A native of Elmhurst, N.Y., Caputo is a 2002 graduate of Westfield (Mass.) State University with a degree in finance and economics. He was a four-year letter winner as a point guard for the Division III Owls and served as captain and earned the team’s Outstanding Contributor Award as a senior. A 1998 graduate of Archbishop Molloy High School – Larrañaga’s alma mater – Caputo, too, played for legendary head coach Jack Curran.

Caputo and his wife Julie have two daughters, Lily and Charlotte.