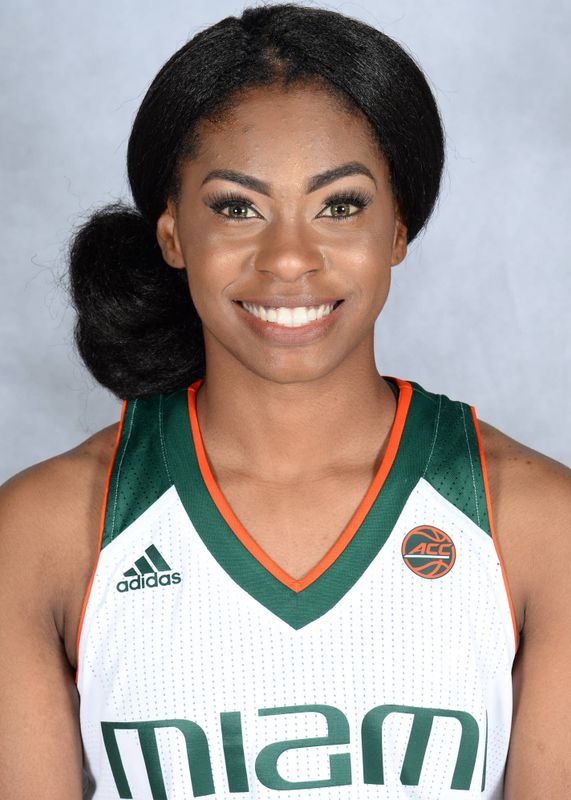 As a Junior (2016-17): Sat out the first nine games of the season during the fall semester in accordance with NCAA transfer rules … Played in seven games, finishing the year with two points, two rebounds and three assists … Committed just one turnover … Made her Miami debut at FIU (12/16) … Tallied a pair of assists in the first home outing of her career against Coppin State (12/19) … Notched her first point and rebound as a Hurricane in a season-high five minutes at Pittsburgh (1/2) in the first ACC playing time of her career … Registered one point at RV/No. 24 Syracuse (1/22).

As a Sophomore (2015-16): Transferred from Auburn University after fall semester … Sat out season due to NCAA transfer rules.

High School: Graduated from Grandview Preparatory School … Played varsity basketball at American Heritage (Delray Beach) School in eighth and ninth grade … Rated as a three-star prospect and a top-20 guard recruit by ESPN HoopGurlz … McDonald’s All-American Game nominee … Grandview Prep’s all-time leader in points, assists and steals … Scored over 1,800 points in her career … Four-time team captain and four-time district champion … As a senior year, helped team to the class 2A state title, the first in school history … Named MVP of the state final … Tabbed as an FABC First Team All-State selection as a senior … Chosen as the Palm Beach Post Small Schools Player of the Year as a junior … Selected as the Sun Sentinel 5A-2A Player of the Year as a sophomore after leading the team to the first of three consecutive 2A state semifinal trips … Four-time Sun Sentinel All-County selection, including as an eighth grader … Participated in the 2011 USA U16 National Team Trials in Colorado Springs, Colo. … Member of the Spanish National Honor Society, chess club and debate club.

Personal: Full name is Neydja D’Jenay Petithomme … Name is pronounced NEE-Zhuh PET-Ee-Home … Parents are Dr. Yveny Petithomme II and Junette Petithomme … Father is a doctor and mother is a nurse … Has a younger brother, Yveny III … Majoring in broadcast journalism … Career goal is to be a television anchor or broadcaster … Enjoys playing the piano and volunteering at her church … Favorite athlete is Chris Paul because of his finesse, smooth style of play … Best sports memory is winning the state championship as a high school senior … Chose Miami because of its great academics, quality of its conference and the coaching staff.