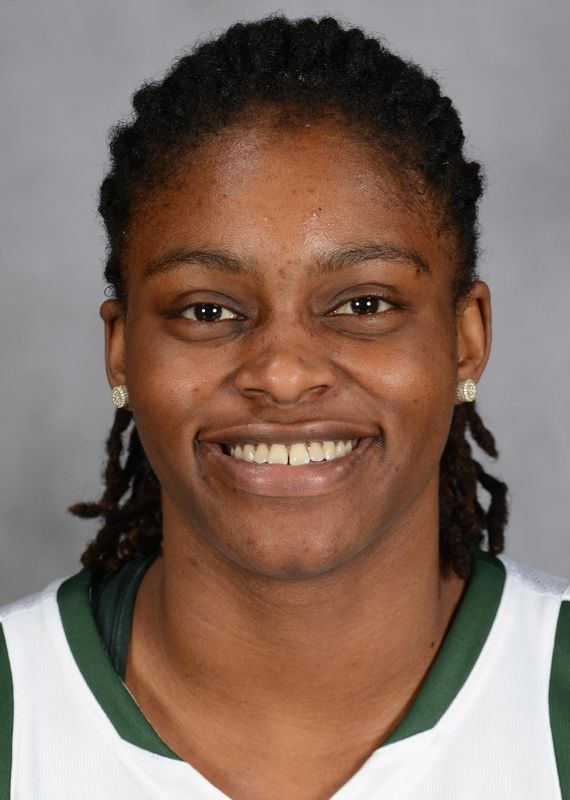 2014-15 (As a Senior): Miami Holiday Tournament All-Tournament Team
Played in 32 games with nine starts and scored double digits eight times, including in three of Miami’s final four games … Led the team in three-point field goal percentage (36.2), good for No. 12 in the ACC, and finished second on Miami in made three-pointers (42) and third in made field goals (84) … Ranked fourth among Hurricanes in points per game (7.2) and averaged 8.6 points over the final 23 games of the season … Scored five points and grabbed five rebounds against UNF (11/21) … Recorded seven points, three rebounds and tied for a game-high with a career best three steals in the win over Illinois State (11/28) … Posted 10 points and tied for a team-high two steals in the Miami Thanksgiving Tournament championship game win against Tulsa (11/29) … Recorded eight points and made two three-pointers for the second time in her Miami career against Coppin State (12/13) … Set career highs in points (20), field goals made (eight), field goal attempts (13), and three-point field goals made (four) in the game at Tulane (12/19), also had then-season highs in rebounds (six) and minutes played (27), and her 80 percent shooting from long range equaled the eighth best mark in program history (min. 4 3PA) … Scored 15 points and shot 3-of-4 from three-point range in the Miami Holiday Tournament championship game against LSU (12/29) … Scored eight points and shot 2-of-2 from three-point range in the win over fourth-ranked Notre Dame (1/8) … Poured in a game-high 17 points and matched a then-career high with four made three-pointers against Clemson (1/15) … Scored a team-high 17 points and set a new career best with five made three-pointers at No. 16/14 Duke (1/18), also matching her then-season high with six rebounds … Had eight points and equaled her then-season high with six rebounds at fourth-ranked Louisville (1/25) … Scored eight points and set career bests in free throws made (six) and attempted (seven) in Miami’s win over Georgia Tech (2/15) … Posted nine points and five rebounds in her eighth start of the season on senior day against No. 9/8 Florida State (3/1) … Scored 13 points and made a trio of three-pointers in the ACC Tournament second round victory over Virginia (3/5) … Scored 11 points, grabbed four rebounds and tied her season best with a team-high three assists in the NCAA Tournament first round win over No. 6 seed Washington (3/20) and also became one of three Hurricanes ever to make multiple three-pointers in an NCAA Tournament game without a miss … Posted 15 points and grabbed a season-high, team-leading seven rebounds in the NCAA Tournament second round game at third-seeded Iowa (3/22), also tying her season highs in assists (three) and career high in minutes played (31), while finishing with 54.5 percent (6-of-11) mark from the field, good for the eighth best in an NCAA Tournament contest in program history (min. 10 FGA).