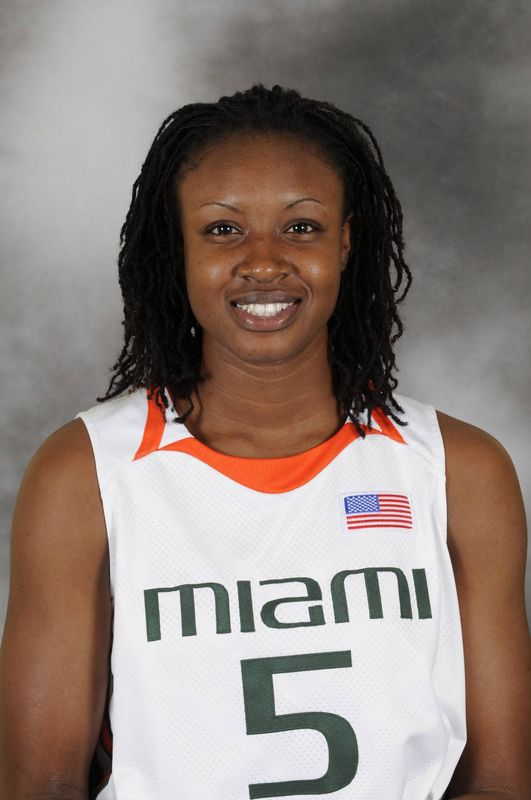 2007-08 (JUNIOR)
Played in 25 games, starting one… Averaged 3.2 points and 2.2 rebounds per game… Scored a career-high 18 points in win against Southern Miss (12/18)… Set a career-high with five blocked shots versus Ole Miss (12/15)… Made her first start in Miami uniform scoring six points and grabbing seven rebounds versus Houston (12/8)… Made the most of her time scoring six points, all in a two-minute span versus Central Florida (12/2).

PRIOR TO MIAMI
Played basketball for two years at Florida Community College in Jacksonville, earning Honorable Mention All-America Team honors from both Kodak/WBCA and the NJCAA as a sophomore in 2006-07 and First Team All-Mid Florida Conference and Florida Community College Activities Association (FCCAA) Region VIII State/Regional All-Tournament Team accolades as a freshman in 2005-06… As a sophomore, averaged 19.6 points, 9.0 rebounds and 1.4 steals per game, while shooting 63.6 percent from the field to lead the NJCAA Region VIII in field goal percentage and rank second in scoring and sixth in rebounding… 2005-06 conference champions, advancing to the second round of the state tournament… Recipient of the Coaches Award and selected team MVP… As a freshman, averaged 11.2 points, 6.1 rebounds and 1.6 steals per game, earning the team’s Most Improved Award… At Appling County High School, was a four-time letterwinner in basketball and three-time letterwinner in track & field… 2005 region champions in basketball.

PERSONAL
An art major with a minor in architecture… Aspires to become an architect and designer… Has two sisters… Off the court, enjoys painting and photography.