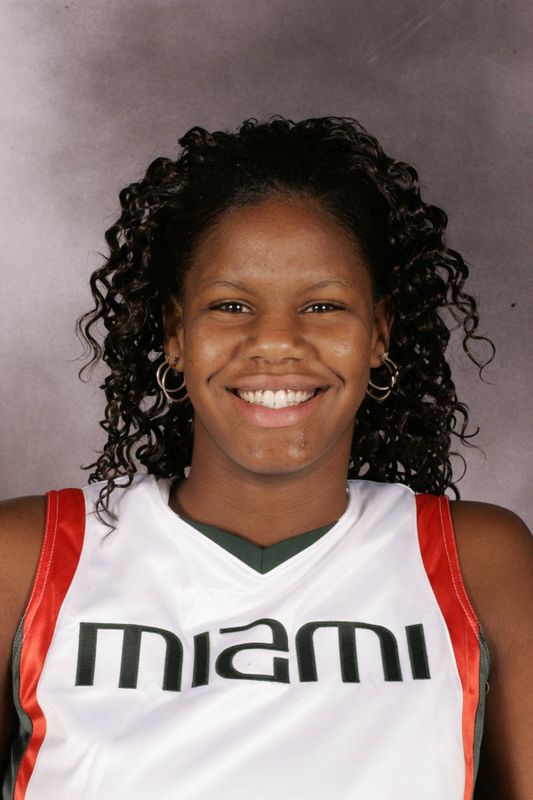 2005-06 (Freshman)
Played in 22 games, starting 11 before going down with a season-ending knee injury (ACL) Feb. 13…Averaged 5.7 points and 5.3 rebounds per game…Finished fourth on the team in scoring and second in rebounding…Averaged 1.4 blocks per game, the seventh highest single-season total in school history and the highest since 1997…Second on the team in offensive rebounds (2.3 per game) and fourth on the defensive end (3.0 per game)…Scored a career-high 16 points, including 14 in the first half alone, and recorded seven rebounds at Georgia Tech (1/5)…Her performance against the Yellow Jackets landed her ACC Rookie of the Week honors becoming the first freshman in UM history to earn the ACC accolade…Became the first UM freshman to record a double-double since 2002-03 with a 12-point, 10-rebound effort at Montana (12/16)…Scored nine points with eight rebounds in the first start of her career versus Hartford (12/10).

Prior to Miami
As a standout at Winter Haven High School, was considered by many recruiting reports to be one of the top five players overall and the top post player in the state of Florida…Listed as one of the top 77 players in the country coming out of high school…A McDonald’s High School All-America nominee…Named a Street and Smith’s High School Honorable Mention All-American in 2003 and 2004…Earned First Team All-State and First Team All-District honors following her senior season at WHHS…Led WHHS to a 29-1 record en route to a State Championships in 2005…Was named the 2005 Florida State Tournament MVP.