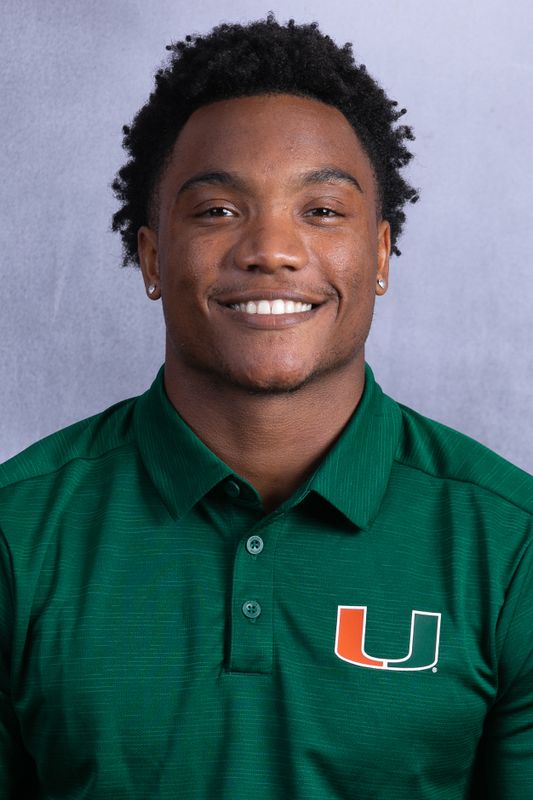 2020 (Redshirt Senior): D’Eriq King was named one of four team captains prior to season…Started all 11 games at quarterback and helped lead Hurricanes to 8-2 record in regular season, including 7-2 mark in Atlantic Coast Conference play…Earned All-ACC Honorable Mention recognition…Named semifinalist for Maxwell Award, Davey O’Brien Award and Johnny Unitas Award…Threw for 2,686 yards with 23 touchdown passes compared to just five interceptions in regular season…Completed eye-popping 64.1 percent of passes (211 of 329 in regular season…Set standard for single-season rushing yards by Miami quarterback, rushing for 538 yards on 130 carries, averaging 4.1 yards per carry…Scored four rushing touchdowns…Named ACC Quarterback of the Week after three of 10 starts…Made first start of Miami Hurricanes career in season opener against UAB (Sept. 10), totaling 144 passing yards and 83 rushing yards in win…Finished 16-for-24 with one passing touchdown and scored one rushing touchdown on 12-yard run…Extended own FBS record with at least one rushing score and one passing score to 16 straight games…Had long pass of 25 yards and long rush of 31 yards…Delivered dominant effort in road win over top-20 Louisville (Sept. 19), throwing for 325 yards on 18-for-30 passing with three touchdown passes…FBS record of 16 straight games with at least one rushing TD and one passing TD came to an end versus Cardinals…Named ACC Quarterback of the Week, Maxwell Award Player of the Week, Manning Award Star of the Week, Davey O’Brien “Great 8” and Earl Campbell Award Player of the Week for performance versus Louisville…Repeated as ACC Quarterback of the Week in romp of rival Florida State (Sept. 26), throwing for 267 yards on 29-for-40 passing with two touchdowns…Added game-high 65 rushing yards on just eight carries in win over Seminoles…Started Miami’s game at No. 1 Clemson (Oct. 10) and finished with 121 passing yards and 84 rushing yards, including one rushing score…Threw first two interceptions of season against Tigers…Tossed season-high four touchdown passes in win over Pittsburgh (Oct. 17)…Finished with 222 yards on 16-for-31 passing with two interceptions in start against Panthers…Threw for 322 yards in win over Virginia (Oct. 24)…Had one touchdown pass and completed 21 of 30 pass attempts in start versus Cavaliers…300-yard game was second of season and eighth of career…Had historic performance in come-from-behind win over NC State (Nov. 6), becoming first Miami quarterback to rush for 100 yards (105) and becoming only third quarterback in ACC history with more than 400 yards passing (430) and 100 yards rushing in single game, joining Lamar Jackson and Tajh Boyd…Threw for five touchdowns in win over Wolfpack, becoming second Miami QB to ever throw for more than 400 yards and five TDs in one game…The performance marked only the 13th 400-yard passing game in school history and the seventh-most passing yards in single game ever at Miami…Helped lead Miami to another road win in start at Virginia Tech (Nov. 14), finishing 24-for-38 for 255 passing yards with one passing touchdown…Added 54 rushing yards on 18 carries with 10-yard rushing score…Delivered another strong outing in road win at Duke (Dec. 5), totaling 248 passing yards and three touchdowns on 16-for-24 passing…Rushed for 46 yards on 11 carries, including 11-yard touchdown run, in victory over Blue Devils…Named semifinalist for Johnny Unitas Golden Arm Award, Maxwell Award and Davey O’Brien Award in early December…Threw for two touchdowns and 239 passing yards with one interception in finale against North Carolina (Dec. 12)…Led team with 53 rushing yards in game against Tar Heels…Started 2020 Cheez-It Bowl against Oklahoma State (Dec. 29), finishing 10-for-13 for 113 passing yards and one touchdown.

Before Miami: Delivered dominant career at University of Houston, finishing with 78 total touchdowns (50 passing, 28 rushing), 4,925 passing yards and 1,421 rushing yards despite starting just 22 games…Totaled 6,346 yards of offense (181.3 per game)…Set The American Athletic Conference touchdown responsible for in a season record with 50 despite missing the last 2.5 games with an injury in 2018…Led nation in points responsible for per game with an average of 27.5, four points ahead of the No 2 spot shared by Heisman finalists Kyler Murray and Dwayne Haskins during prolific junior season…Had a rushing touchdown in all 11 games in 2018 and one of only three QBs in FBS history with at least 35 passing TDs and 13 rushing TDs…2018 Maxwell Award semifinalist and Earl Campbell Award finalist.

High School: Four-star recruit by ESPN and member of ESPN300, ranked No. 202 overall…Named district 22-6A MVP as a senior…Named first team All-Greater Houston ..Elite 11 semifinalist…Ranked No. 11 player in Houston area by VYPE Houston…Closed out high school career with over 10,000 career passing yards and 3,000 career rushing yards…Threw for 2,898 yards and 43 touchdowns against just five interceptions as senior while rushing for 640 yards and eight touchdowns…Named to Houston Chronicle’s 2016 Top 100 list…As junior, threw for 3,193 yards and 47 touchdowns with just three interceptions while rushing for 780 yards and 12 touchdowns…Ran for 1,289 yards and 17 touchdowns as sophomore while throwing for 2,628 yards and 36 touchdowns…Had 1,745 passing yards as freshman to go along with 14 touchdowns through the air and 11 on the ground with 731 rushing yards.