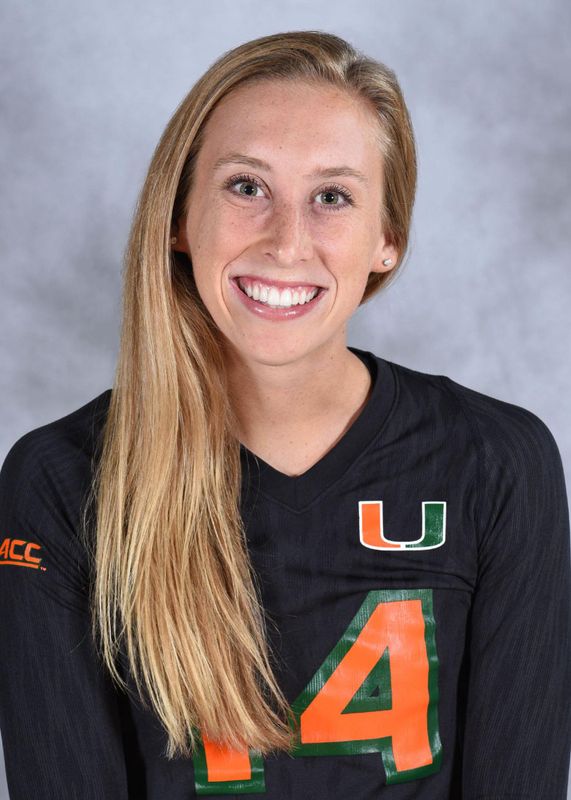 2018 (Senior): Produced 11 kills in the first match of her senior campaign and adding one assist and one service ace against FAU (Aug. 24)… Came back the following match recording 11 more kills along with two block assists and two digs against FGCU (Aug. 25), recorded seven more kills, one service ace and five digs in the final match of the Sunshine State Challenge, against UCF (Aug. 25)… Was named to the Puerto Rico Classic All-Tournament Team after finishing the tournament with 21 kills, four digs and one block (Aug. 31 – Sept. 1)… Finished with 12 kills and two digs against TAMUCC (Sept. 7) and recorded three kills and two digs against Texas Southern (Sept. 8)… Recorded 10 kills, three service aces and four digs in the ACC opener against Wake Forest (Sept. 21)… Tallied a season-high 17 kills, two service aces and a season-high four block assists against Duke (Sept. 23)… Led the Canes with seven kills against Pitt, one ace and one block (Sept. 28)… Finished with 13 kills and two assists against Virginia (Sept. 30)… Was one kill shy to tie her season high in kills, finishing with 16 and two block assists against UNC (Oct. 5)… Recorded 13 kills, two service aces and five digs against NC State (Oct. 7)… Produced 11 kills against Syracuse including one ace, one dig and a solo block (Oct. 12)… Finished with 13 kills, one ace and one solo block in the 3-0 sweep against Boston College (Oct. 14)… Tied a season high against Clemson with 17 kills and one assist and two blocks (Oct. 19)… Extended her 10 or more kill streak to seven matches, tallying 11 against Georgia Tech (Oct. 21) and one assist and one solo block… Was active in all aspects of the game with 15 kills, one ace, one dig and three blocks in the 3-2 win over Florida State (Oct. 24)… Finished with 19 kills, one assist and three digs in the sweep against Virginia Tech (Oct. 26)… Led the Canes against then No.-24 Louisville with 13 kills and five digs (Nov. 2)… Registered a team-leading 12 kills and five digs against Notre Dame (Nov. 4)… Registered a season-high 18 kills against Wake Forest and came up with two aces and one block (Nov. 9)… Tallied nine kills, ending a 12-match streak on 10 or more kills and a career-high four aces and three block assists at UNC (Nov. 11)… Ended her collegiate career with 13 kills, one assist, two aces, three digs and one block at Duke (Nov. 23).

2017 (Junior): Had eight of her 11 kills, eight of her nine digs, as well as her only block in the Southern Miss Invitational, against Nicholls State (Aug. 26), hitting .386 against the Colonels … Had one of the best matches in her career in the Sunshine State Classic opener, notching career-high 17 kills, tying her career-best with three assists, in addition to notching season-best five blocks against FAU (Sept. 1) … capped off the tournament with another double-figures performance at FGCU (Sept. 2) – 12 kills on .321 hitting and six digs on the defensive end … Repeated career-high of 17 kills and recorded seven digs, a block and an assist in ACC opener against Viriginia Tech (Sept. 22), earning a start in the five-set victory over Virginia (Sept. 24) … Recorded a double-double with career-best 17 kills and 14 digs in the 3-1 win at Notre Dame (Sept. 29), adding two assists in the process … picked up two kills and three digs in Miami’s first defeat of the season, 3-0 at Louisville (Oct. 1) … Contributed three kills and two digs against Florida State (Oct. 4) and tallied 11 kills on .409 hitting display against Pittsburgh (Oct. 8), while also picking up four digs against the Panthers … Recorded 13 kills and seven digs at Duke (Oct. 13), then added 11 kills, seven digs and an assist in sweep over Wake Forest (Oct. 15) … combined for five blocks against the Blue Devils and the Demon Deacons, including a solo block in each contest … Recorded a career-high of 21 kills against Notre Dame (Oct. 22), a performance complemented by seven digs and a service ace. Two days earlier, Bird picked up 13 kills, nine digs and four blocks in conference victory over Louisville (Oct. 20) … Picked up 11 kills, two aces and eight digs in a win against NC State (Oct. 27) … Tied a career high of three assists along with 11 kills, two aces and eight digs in a sweep against defending champion North Carolina (Oct. 29) … Recorded 11 kills, five digs and two blocks in sweep over Florida State (Nov. 1) before picking up 18 kills, two digs and an assist at Pittsburgh (Nov. 3) … Contributed 11 kills, five digs, an assist and a block in a win over Boston College (Nov. 9) before recording 11 kills, seven digs, two service aces, two blocks and an assist in a victory over Syracuse (Nov. 12) … Combined for 20 kills and 10 digs in road victories over Virginia (Nov. 17) and Virginia Tech (Nov. 19), tallying an assist in each match and a solo block – her sixth of the season – against the Cavaliers … Recorded a career-high three service aces along with 15 kills and seven digs in a win over Georgia Tech (Nov. 22), then added a season-high three assists, seven kills, two digs and a block in a win over Clemson (Nov. 24) … Recorded eight kills, five digs, two assists and two blocks in a four set win over Charleston (Nov. 30) in the NCAA Championship … Contributed five digs, two kills and a block in an NCAA Championship game against Florida (Dec. 1).

High School: A star at Westview High School, was a three-year starter and named team captain as a senior … Earned All-Tournament honors at both the Beach Cities Invitational and the Santa Barbara Tournament of Champions … Missed most of her junior season due to an injury, but she joined the Wolverines late in the year and helped them reach the Southern Section Finals of the California state playoffs … As a sophomore, was selected First Team All-Palomar League and earned All-Tournament honors at the Beach Cities Invitational, the Southern California Invite and the Scripps Ranch Tournament.