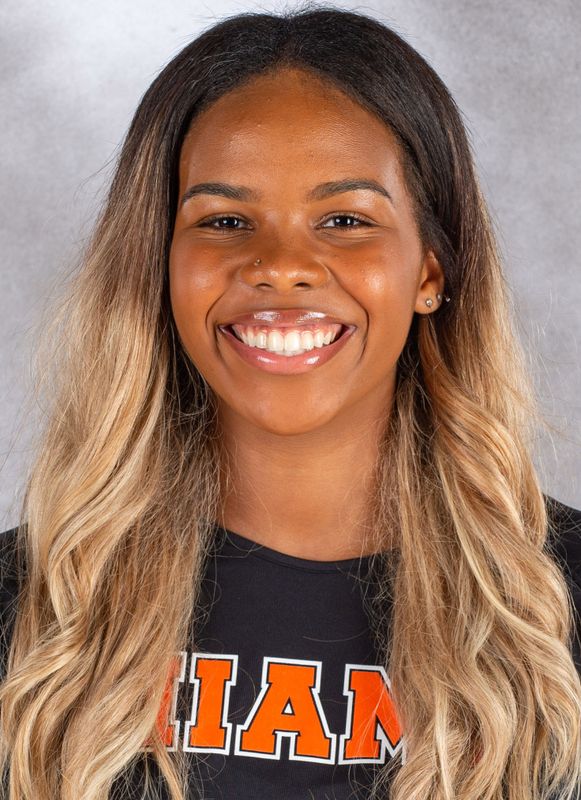 2021 (Junior): Played and started in eight matches before a season-ending injury… tallied a season-high nine kills with a .438 hitting percentage against Alabama (9/11)… her nine kills against Alabama led the Canes… recorded a season-best six blocks in Miami’s win over FIU (8/28)… totaled eight kills in two matches (Tarleton State and South Florida)… finished with three digs against Texas State (9/10).

Spring 2021: Returned to action for the Canes against NC State and posted one kill, two assists, two blocks and one dig in the 3-1 win (3/6)… Registered a season-high three kills and two blocks against Notre Dame (3/7)… Played on her home court for the first time since the closing match of the 2019 season in a conference match against Virginia, finishing with one kill and two blocks in the 3-0 sweep (3/13)… In the non-conference match against Virginia, she finished with one kill and two blocks in the 3-0 win (3/14)… Recorded a then-season-high four blocks and matched a season-high with three kills in the five-set win at Duke (3/19)… Boasted a season-high five blocks against Pittsburgh in the 3-1 loss (3/20)… Ended the season sweeping North Carolina at home with two kills and four blocks (4/2).

2019 (Freshman): Finished with the second most kills on the team (302) and recorded the second most kills by a freshman in Miami history since Lane Carico finished with 369 in 2008 her freshman season… Prince started and played in all 26 matches for Miami… In her debut match, Prince led the team with 15 kills against Missouri (Aug. 30) and boasted a team-leading and career-high three aces… Recorded 23 kills over the weekend at the Hurricane Invitational and added two aces and 12 digs… In her first road match, she led the Canes with 14 kills, seven digs and one block against TCU (Sept. 13)… Registered a career high 18 kills against Auburn (Sept. 14) and 12 digs, tallying her first of six double-doubles of the season… At the Sunshine State Challenge, Prince finished with double digit kills against all three opponents, FGCU (11), FAU (11) and UCF (15), while recording 10 digs against FAU and 12 against UCF to add two more double-doubles to her name… In the opening ACC weekend, Prince tallied 11 kills,11 digs and two aces at Duke and 10 kills and six digs at Wake Forest… Added nine kills in her first ACC home match against then-No. 4 Pittsburgh (Oct. 4)… Added 12 kills and nine digs in the 3-2 win against Virginia (Oct. 6)… Was one kill away from yet another double-double against UNC after adding 10 digs, then traveled to NC State and recorded 13 kills and eight digs (Oct .13)… Registered 16 kills in the win against Syracuse and eight and three aces against Boston College (Oct. 20)… Went to FSU (Oct. 30) and finished with 11 kills and five digs… At Virginia Tech she notched 12 kills 15 digs, her final double-double of the season (Nov. 3)… Co-led the team with 14 kills against Louisville at home and an ace (Nov. 8)… Hosted Notre Dame with seven kills and five digs, followed by a 12-kill and two aces match against NC State (Nov. 15)… In her last ACC road match, Prince had a tying team-high 11 kills at Louisville (Nov. 24)… Added 15 kills and 12 aces during the final weekend of ACC play.

Personal: Daughter of James and Jai Prince… Has one brother and sister… Dad wrestled at Appalachian State.