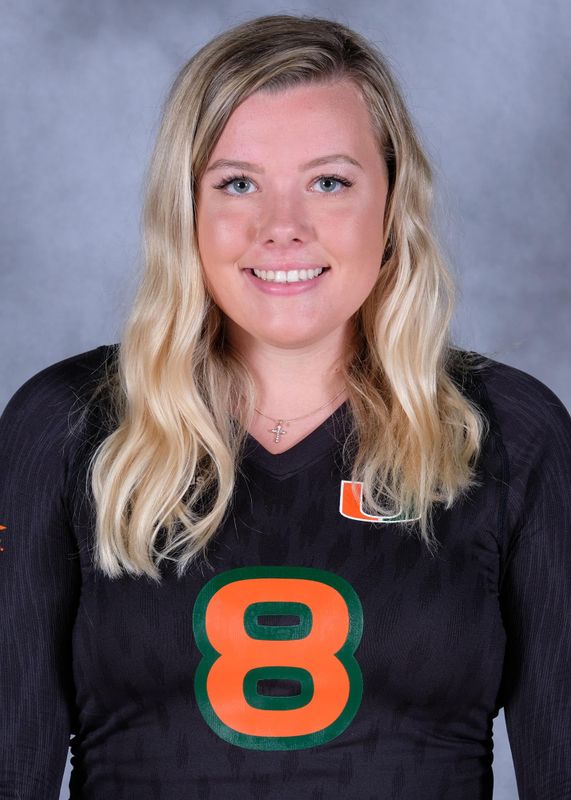 2017 (Sophomore) (Milwaukee): Started the season being named to the Panther Invitational All-Tournament Team after averaging 13 kills and five blocks in the season-opening tournament … also hit .476 (13-21) against Virginia Tech in the tournament finale Aug. 26 … started off a big weekend with a match-high 19 kills while hitting .325 in a five-set thriller over Fairfield Sept. 1 … followed that up with 10 kills and five blocks in a sweep of Samford later that day … had another seven kills, four blocks and two aces in a quick 3-0 win over Loyola Sept. 2 … had five blocks against Northwestern Sept. 8 … one day later, had 10 and 19 kills in wins over DePaul and Army … had a career-high 10 blocks – five solo – in just three sets against NC State Sept. 16 … had a match-high 20 kills and five blocks in a win over Oakland Sept. 23 … set a new career-best hitting percentage at .579 (11-19) to go with four blocks at Green Bay Sept. 29 … tied a career best with 24 kills to go with seven blocks against UIC Oct. 1 … registered 17 kills and five blocks at NKU Oct. 7 … was dominant over the weekend with 15 kills in a swep of Youngstown State Oct. 14, followed by another 19 kills and seven blocks to take down Wright State one day later … continued her hot streak with another 21 kills, four blocks and four digs in a win at Oakland Oct. 20 … again had the match high with 19 kills and another four blocks at Cleveland State one day later … finished with a match-high 20 kills against Green Bay Oct. 28 – the 10th most in program history for a three-set match … had another outstanding weekend, tallying 23 kills on .429 hitting in a three-set win over NKU before another 21 kills on .457 hitting one day later against IUPUI Nov. 3-4 … the 23 kills against NKU were second-most in program history in a three-set match … picked up match-high-tying 13 kills and half of the Panthers’ 10 blocks at Wright State Nov. 10, while also contributing four digs and two aces … a day later, capped the season with match-high 22 kills (.364), five blocks (two solo) and three digs.

2016 (Freshman) (Milwaukee): Started all 28 matches as a true freshman … named Horizon League Freshman of the Year after an incredible first season on campus … also named to the All-League and All-Freshman teams … finished the season ranked in the top-10 in freshman history in blocks (115 / third), kills (308 / third), kills/set (2.91 / third), blocks/set (1.08 / t-fourth) and attack percentage (.259 / t-fifth) … made collegiate debut Aug. 26, starting in a win over Bradley and contributing five kills and four blocks … later that day, had nine blocks and eight kills in a sweep of Akron … closed out the home tournament with another seven blocks and five kills against Western Illinois one day later … registered 14 kills, three blocks and a service ace at Sacred Heart Sept. 3 … later that day, had 11 kills, two blocks and three more aces in a sweep of George Mason … had 13 kills in a win over tournament hosts Western Michigan Sept. 10 … notched seven kills and three blocks against Missouri State Sept. 16 … hit an impressive .417 with 11 kills at Marquette one day later … had a match-high 24 kills and hit .360 to go with seven digs and five blocks in a win over Northern Kentucky Sept. 23 … one day later, added nine more kills and four blocks in a sweep of Wright State … hit a season-best .476 with 11 kills and seven blocks in a sweep of UIC Oct. 1 … added 13 more kills and four more blocks one day later against Green Bay … had 15 kills and six blocks in back-to-back matches at Cleveland State and Youngstown State Oct. 7-8 … notched 11 kills at Oakland Oct. 14 … followed that up with a monster game, tallying 20 kills and eight blocks in a four-set win at Valparaiso Oct. 15 … hit an impressive .393 with 13 kills, four blocks and three aces in a sweep of Youngstown State Oct. 21 … followed that up with 14 kills and eight blocks against Cleveland State one day later … had six blocks – including two solo – against Green Bay Oct. 30 … posted 17 kills and four blocks in a win at Wright State Nov. 4 … led all players with 19 kills to go with five blocks against Oakland in the league tournament Nov. 18.

High School: A four-year player at Jacobs High School, where she started on the varsity team as a freshman … captained the team in her final three seasons, where she also led Jacobs in kills and blocks … named to the all-area and all-conference teams junior and senior years … won All-Star award at club level and helped her team take third place at AAU championship in 2015 … graduated with honors

Personal: Daughter of Joe Wallenberger and Colleen Wallenberger … has volunteered at the animal shelter, food shelters and at the Special Olympics