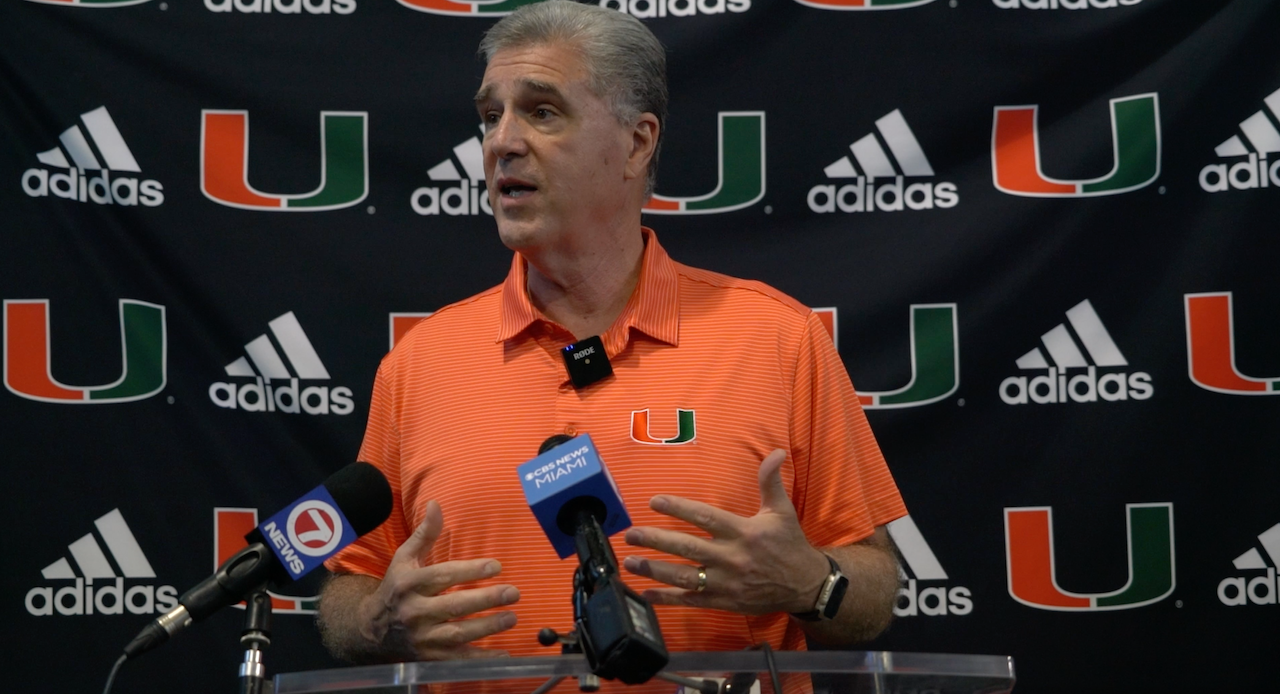 Happy New Year! I hope you had the opportunity to celebrate and connect with family and friends over the holidays. Miami Athletics is already off and running just a few days into what promises to be an exciting 2023.

Our men’s basketball team is ranked 12th in the nation after winning nine straight games and sits atop the ACC standings with a 13-1 overall record and a 4-0 mark in conference play. Isaiah Wong, who has twice earned ACC Player of the Week honors, leads the team in scoring at 17.1 points per game. The Canes return to action Wednesday night for another key conference matchup at Georgia Tech. Tipoff is 7 p.m. on Bally Sports.

Head coach Jim Larrañaga was recently announced as a first-time nominee for the Naismith Memorial Basketball Hall of Fame. This is a tremendous honor for Jim, who has been a terrific ambassador for college basketball throughout his career and especially here at Miami, where he has led our program to great heights over the past 12 seasons. Congratulations to Coach L!

Our women’s basketball team (8-6 overall, 1-2 ACC) defeated Pittsburgh on New Year’s Day to secure its first conference win of the season. Haley Cavinder leads the Canes in scoring at 12.6 points per game after a 21-point outing against the Panthers. The Canes return home Thursday to host No. 13 North Carolina at Watsco Center. Tipoff is 6 p.m. on ACC Network Extra.

Single-game tickets are still available for both our men’s and women’s basketball teams. Click here to purchase. We hope to see you at Watsco Center!

Our swimming and diving team is back in action tomorrow as they host Boston College and SMU at 2 p.m. Come out to Whitten Pool to cheer on the Canes!

Our football program signed a 2023 recruiting class that is widely considered to be one of the top five classes in the nation. We are welcoming 29 new Canes – 25 high school prospects and four transfers — many of whom will be enrolling for this spring semester. The future looks bright for Canes football. Congratulations to Mario Cristobal and his staff for their tireless work on the recruiting trail!

Baseball season is right around the corner and the Canes are ranked eighth in the nation in Collegiate Baseball’s preseason poll. We have another great home season at The Light on tap, highlighted by series against Florida State, NC State and Georgia Tech. Click here for ticket information.

You can keep up with all the Canes action by signing up to receive our weekly Miami Athletics Report. Click here to sign up!

Twenty-five of our student-athletes earned their degrees at fall commencement last month. Eight of the University’s athletic programs were represented at today’s commencement, led by the football team with nine graduates. Graduation is a significant milestone for our student-athletes, and I am extremely proud of what this group has accomplished. Wherever their life’s journey takes them from here, they will always have a home at the University of Miami.

We lost one of the University of Miami’s most passionate supporters over the holidays as Paul DiMare passed away. I knew Paul for many years, and he was always kind, encouraging, generous and thoughtful. He was a true friend to both the University and the athletic department, and he will be deeply missed. Our hearts go out to his son Gino, our head baseball coach, and the entire DiMare family during this difficult time.

Our Canes Community remains stronger than ever thanks to your continued support. Happy New Year from all of us at Miami Athletics and we hope to see you cheering us on throughout 2023. Go Canes!